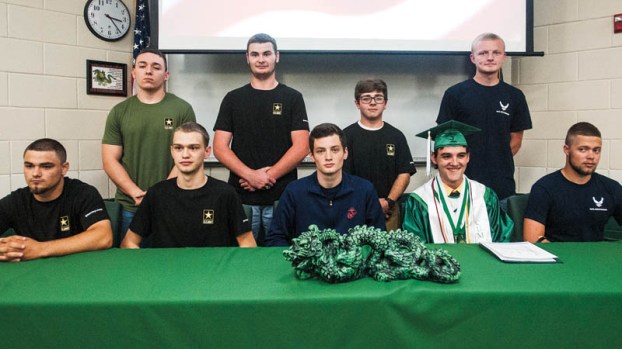 Nine young men from Fairland High School signed their enlistment papers on Friday, committing themselves to the United States Army, Air Force, or Marine Corps, in a brief ceremony at the school

“While other seniors are trying to determine their path,” said Fairland business teacher Mindy Clark, “these young men have dedicated themselves to the United States Military.”

Johnson and Nester will join the Airborne Rangers, explained Staff Sgt. Toricho with the U.S. Army, while Sheppard will join a group specializing in psychological warfare.

“Secret Squirrel stuff,” teased Toricho of Sheppard’s assignment after thanking the families of all three boys for allowing her to work with their sons.

Staff Sgt. Good told the crowd that his recruits would be taking different paths. Bradberry will undergo training to become a helicopter mechanic, a role that Good described as “very mentally and physically challenging,” while Brogan will be entering the U.S. Army Reserve to pursue higher education.

Timothy Chianesi was the lone student to sign with the Marine Corps, following in the footsteps of his older brother and father, who are also Marines according to Marine Corps Staff Sgt. Wade. Chianesi will focus on fire and rescue training.

Steven Plybon, Ethan Marcum, and Colton Isaiah Slone signed with the Air Force, each going into various technical specialties. Plybon will specialize in electrical systems while Marcum, who Air Force Sgt. Hibbs described as “one of the smartest” young men he’s worked with, will train as a technical application specialist.

Slone, who will be leaving early for basic training and will not be able to attend graduation, will have a flight job in airborne electrical systems.

Dillon explained that they’ve done these sorts of signing ceremonies in the past, for students receiving sports scholarships, but this ceremony honoring students who are joining military service was a new event.

“Usually they thank us,” he said. “This is one time we can say ‘thank you’ (for your service)… It’s definitely an honor for our community.”

Relay for Life set for May 19