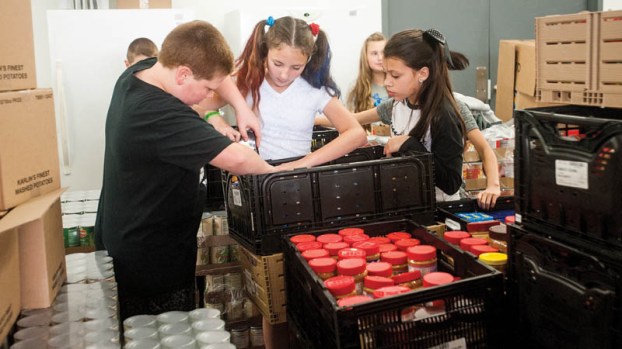 Students from Ironton Elementary dropped off a busload of food to Harvest for the Hungry on Wednesday morning.

The students, pantry workers and teachers toted boxes of macaroni and cheese and many, many jars of peanut butter off the bus into the food pantry building.

The food was part of a competition between the boys and girls of IES. Boys brought in macaroni and cheese, girls brought peanut butter.

“It was the whole student body, kindergarten to fifth grade,” said IES Assistant Principal David Ashworth. “They were about even with about 1,500 pieces.”

Because of prices, two boxes of macaroni and cheese equaled one jar of peanut butter.

The boys won, so that means they get to go to lunch before the girls. “The girls started off hot and won the first three days, but the boys won the last two days and came back for the total victory,” Ashworth said.

But Ashworth said it wasn’t about competing so much as it was helping.

Ashworth said the leadership team works with teachers and administration on various projects.

“They know that they are going to be working,” he said. That including hopping off the bus at 9 a.m. to carry food into the pantry.

“Not really, because, this is what made me happy, the fourth grade boys thought they were going to get first lunch too, but it was only for fifth grade,” she explained. “It was just funny to see their faces.”

She said she happy to participate because it would feed the hungry, “so it would be helpful, and it would be fun at school.”

Ben Sloan, of Hecla-Rock Hill, said he was happy to participate because it would help people.

“We got 906 boxes of mac and cheese and 853 peanut butter. That’s a lot of food,” he said. “We had a little competition, but that wasn’t the meaning of it. We did this to get food to the hungry who couldn’t really afford it.”

He did admit to liking to get to go first at lunchtime.

“Yeah, I am happy about that part, we usually go last,” he said.

Diane Porter, the director of Harvest for the Hungry, said she was overjoyed and overwhelmed to see the amount the kids collected.

“It just amazing me how well they did,” she said, adding the 853 jars of peanut butter will last about a month and a half. “We give about one jar per family,” she told the assembled leadership team. “Unless they are a big family, then we give big jars. We have families that come through here that have 12 people.”

Porter said the food pantry feeds about 450-550 families a month.

Hard work pays off for students