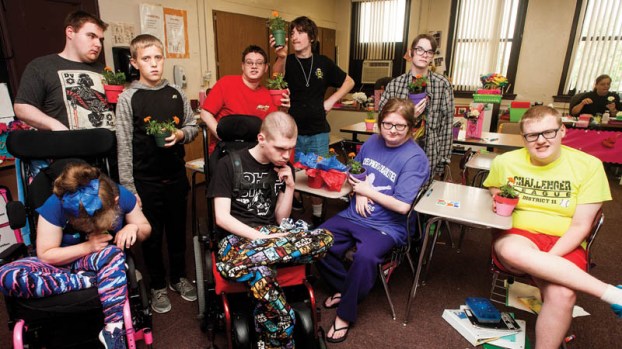 Students at Open Door school have been learning about the importance of the environment.

On Wednesday, classes took part in a planting effort on the school’s grounds, as well as individual projects in their classes.

“It’s an Earth Day event,” Stephanie Helm, who handles outreach and education for the Lawrence-Scioto Solid Waste District, said. “Though we had to push it back to May for planting.”

She said Justin Wurtzler, the manager of Lowe’s in South Point, provided materials for the projects, as he has done for the past six years.

“He provided the soil and the flowerpots,” she said.

Cassie Patton, who teaches Vocational 1 at the school, said the projects doubled for use with another holiday coming up this weekend.

“A lot them decorated pots and are using them for Mother’s Day gifts,” she said of her students, who range from 17-20 in age.

Patton’s class also led the school in its recycling effort for the past two weeks.

“We collected it this morning and took it to Rumpke (Recycling),” Helm said.

“It was a friendly competition, and we rewarded allt he classes with a pizza party,” she said, noting that it was paid for by the district.

Open Door school, which provides a comprehensive education those with special needs, serves about 70 students at its Ironton campus.