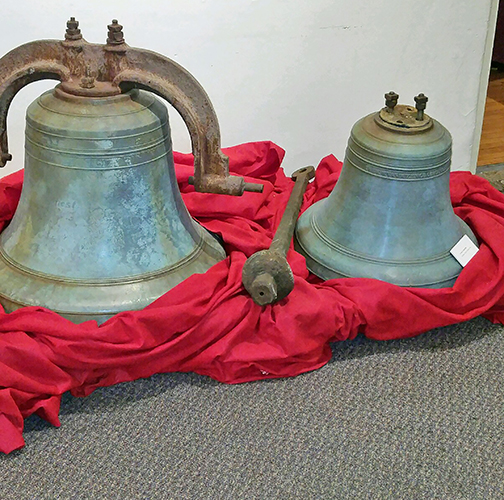 Two of the three bells from the old St. Peter’s Church in Columbus have been recovered. Father Kevin Lutz is still searching for the third bell and is asking for help as well as a reward. (Photo Submitted)

COLUMBUS — Do not ask for whom the bell tolls, just bring it back, please!
That’s the plea of Father Kevin Lutz, the Ironton native who is not only the pastor at St. Mary Catholic Church in German Village but the founder and curator of the Jubilee Museum.
Fr. Lutz said St. Peter’s Church in Columbus was demolished in 1970 with its artifacts scattered at far as Arkansas.
One room of the Jubilee Museum is dedicated to the Franklinton neighborhood and Fr. Lutz has managed to recover stained-glass windows, an altar, pews, benches, statues and Stations of the Cross as well as two bells that rang from the church tower.
However, one bell has not been recovered.
The missing bell is bronze with a green patina or glaze. It is between 20-28 inches tall and 20-plus inches wide. The words “VanDuzen and Tiff” or “Buckeye Bell Foundry” are on the upper rim. There is another inscription on the bell that will be used to confirm that it is the missing bell.
Lutz noted that the bell is only missing, not stolen. The reward for locating the bell is $1,000 and the owner will be reimbursed $4,000 for the bell.
“The statute of limitations has long expired. I’d like to meet the guy or guys who took it. I want to give them each a pillow so he can sleep better,” said Fr. Lutz with a chuckle.
The last sighting of the bell was rumored to be in the Portsmouth area that was given as a gift from the previous owner.
Now 64 years old, finding the bell has become an obsession for Fr. Lutz who cut his church duty teeth at St. Peter’s as a 19-year-old part-time organist during its final days.
“It’s like stamp collecting or any hobby. Once you start, you can’t stop,” said Fr. Lutz.
The priest at the church was the late Fr. Anthony Schlernitzauer who served the parish for all 42 years that it stood. The site on East Fifth Avenue is now the home of a Wendy’s restaurant.
Fr. Lutz said Fr. Schlernitzauer was known for his compassion and generosity. He said that Fr. Anthony — as he was known — secretly gave his mother a few hundred dollars to help pay her son’s college tuition, a fact Fr. Lutz was unaware of until after the elder priest’s death in 1976.
Fr. Lutz said he is working on a book about troubled people who found peace through St. Peter’s and Father Anthony.
“I sometimes think of it as the place where I met God,” said Fr. Lutz.
The items that have been recovered have come from various places.
An ornate bench was bound in a Columbus antique shop. The new St. Peter’s on Smoky Row Road gave him the bells from the old church, he tracked down the 14 plaster Stations of the Cross after receiving a tip that someone in Florida had sold them to an Arkansas church that wasn’t even using them.
Also on his agenda is the return of the pipe organ that was owned by a collector in Newark.
Anyone with information can contact Fr. Lutz at St. Mary Church or the Jubiliee Museum.