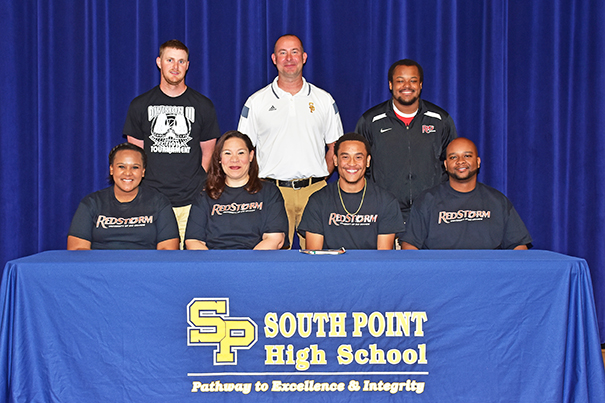 SOUTH POINT — Elijah Adams has spent his career pointing teammates in the right direction. Now Adams is headed in the right direction as well.
The South Point Pointers’ 6-foot senior point guard is headed toward the University of Rio Grande after signing with the RedStorm on Monday.
“Ever since I was little I played the point. This year I played the two because we had another guard (Tayshaun Fox) and he’s pretty good at bringing the ball up and down the court. But I’ve been a point guard pretty much all my life,” said Adams.
“You’ve got to handle the ball pretty much 90 percent of the time. You’ve got to take care of the ball and get everybody involved.”
Adams talked with numerous schools including Kentucky Christian, Salem International and Marshall before settling on Rio Grande.
“I wanted to stay close to home, but the coaching staff is really what sold me. They have a lot a good coaches out there and I like it out there a lot,” said Adams.
“I have to work hard and see where it goes from there. I’ll probably play point, it just depends how it goes.”
Adams proved he could play the point or the two guard last season. A Southeast-Ohio all-district selection, Adams averaged 13 points a game along with 4.6 assists, 3.6 rebounds and 2.7 steals a game.
“I think this year he finally realized he could play at the next level. He started off amazing, then he got hurt early on, but he had a great tournament,” said Pointers’ head coach Travis Wise.
“I think before his career ends at Rio he’ll be playing varsity ball. I think within a year or two he’ll be playing varsity. I think it’s a great opportunity for him and I think he’ll find a profitable career at Rio.”
Adams said hard work helped him improve his scoring although he said that being more of a scorer wasn’t a goal. However, he had 28 points in a season-opening 64-61 win over Ashland in which he hit 7-of-8 from 3-point range.
The seven 3-pointers tied a school record.
“We got in the gym a lot over the summer and improved. It (his scoring average) has went up a lot,” said Adams. “Coach Wise has been an influence. He’s done a pretty good job.”
Adams also plays baseball and football. He said football helped him improved but basketball remains his first love.
“I honestly think football helped. The weight room, the contact, it helped,” said Adams. “Basketball is pretty much it. If anybody asks, ‘what do you want to do?’, I say let’s go play basketball.”
The son of Natalie and Isaac Adams, Elijah plans to major in physical therapy.

Lyle leaves Buckeyes with another hole to fill

COLUMBUS (AP) — Another returning starter is gone from the Ohio State basketball team, casting even more doubt on whether... read more