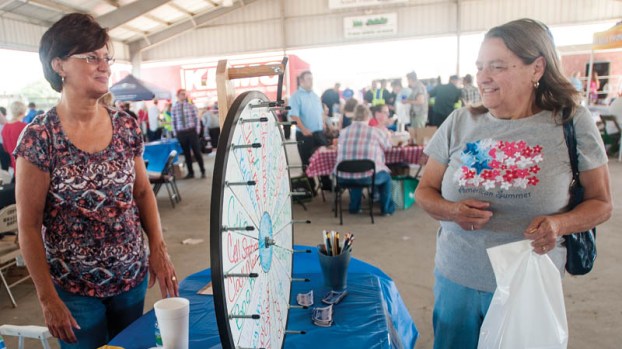 Senior Citizens Day at fairgrounds sees more than 1,500 in attendance

ROME TOWNSHIP — “We couldn’t have asked for better weather,” Darlene Green, the director of the Sybene-Chesapeake Senior Center, said.

The annual Senior Day at the Lawrence County Fairgrounds took place on Tuesday, and the sunny, 80-degree day was a marked contrast from last year’s cold rainy climate for the event.

Green, who organizes the event, said more than 80 vendors had set up for the event, offering food, products geared to seniors and services, along with the music and entertainment for the day.

It has been three years since Green launched the event, which initially drew about 400 to the fairgrounds. Attendance has increased exponentially each year.
“We have about 1,200 here today,” Green said, sitting at the registration booth, before being corrected by another volunteer who told her it was a low estimate. “It’s closer to about 1,500,” she said.

Attendees crowded into the main barn at the fairgrounds, where booths were set up from a range of businesses and organizations, such as the Briggs Lawrence Public Library, Kroger, The Big Sandy Superstore, Ironton Craft Ladies, the Lawrence Early Childhood Academy, the Lawrence County Sheriff’s office and others.

Julie Poff, the activities director of the Wyngate at RiversEdge, said the senior living community had a booth set up to promote their two locations in the region.

“Barboursville and Proctorville,” she said. “We’re giving out door prizes and we have cornhole set up.”

Over at the Citizens Deposit Bank booth, head teller Roberta Queen was dressed in western wear to go along with the theme for the day.

“We’re giving out baskets, with all kinds of goodies,” she said, sitting next to a Citizens Stagecoach sign.

Nina Queen, the student service specialist for Ohio University Southern’s Proctorville Center, said the school had a photo booth going for the day.

“People can dress up and take selfies with Rufus the mascot,” she said.

Green said a popular draw at the event was the homemade ice cream, prepared on site.

“And people are lining up for the door prizes,” she said. “Those are really popular.”

Numerous volunteers helped to make the event a success. Among them were students from Collins Career Technical Center.

She said that students from the school’s welding and carpentry programs had assisted in the physical preparations.

“They helped to set things up and they’re going to help tear down,” she said.

The Sybene-Chesapeake Senior Center, which helms the day’s activities, had a booth at the center of the event.

“We’re selling cookies and candy and sweet stuff,” board member Loreen Plybon said. “We sell it every year and the money goes back into the senior center for things like trips. We just took one to the Amish country in April.”

The senior center is winding down its operation at its present location and is expected to move to its new home, on the first floor of the new Proctor’s Landing senior living apartment building, this summer.