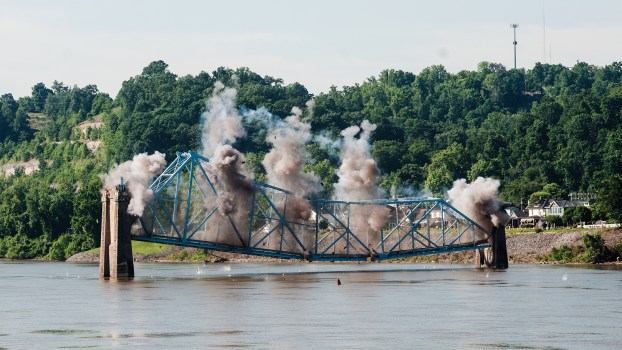 Jessica St. James/ The Tribune The Kentucky side of the old Ironton-Russell bridge is brought down by explosives on Wednesday.

When the old Ironton-Russell bridge opened on April 21, 1922, Warren G. Harding was the nation’s president, radio was in its infancy and prohibition was in effect.

The most popular car was the Model T Ford and the box office was dominated by silent film stars like Charlie Chaplin and Gloria Swanson.

For the following 95 years, through a Great Depression, World War II, the Internet age and beyond, the blue bridge straddled the Ohio River, first as a toll span, a familiar site to generations of Ironton and Russell residents.

That came to an end on Wednesday, as crews from Brayman Construction Company and Advantage Blasting brought down the bridge’s anchor arms, the last remaining steel sections of the cantilever span.

A 1,000-foot safety zone was put in place around the bridge on both sides of the river, out of fears that the old steel in the bridge could act as shrapnel and endanger the public.

In Ironton, Second Street was closed in the vicinity of the bridge, as well as the boat dock at Center Street. Closing took place in Russell as well.

A large crowd of onlookers gathered on the Second Street bridge just out of the safety zone to watch the blast.

After traffic was stopped on the new Oakley C. Collins bridge, three warning sirens sounded, followed by the charges detonating on the Kentucky segment of the bridge, which fell into the river, followed by the sound of the blast and shockwave.

Residents as far away as Hecla and Kitts Hill reported on social media that they were able to feel the vibrations from the explosion.

Once the Kentucky side dropped, another set of warning sirens sounded and the Ironton segment of the bridge was detonated as well.

As the smoke and smell of explosives cleared the air, an all-clear siren sounded and the streets were reopened.

All that remained standing of the old bridge was the concrete piers, which are scheduled to be brought down around the end of the month, Kathleen Fuller, public information officer for the Ohio Department of Transportation, said.

“A specific date has not been set,” she said, adding that, for the demolition, metal cages would be constructed over the piers and they would be imploded.

One of those watching the blast at the river was Lawrence County Sheriff Jeff Lawless, who said he was there purely as a spectator.

“I like a big explosion,” he said. “That’s the best part of the Fourth of July.”

Shortly after the demolitions, many people began stopping by the reopened boat dock in Ironton, where the collapsed segment could be viewed up close, not far the still standing entrance ramp to the bridge.

“It’s sad,” Maggie Sharp, of Ironton, said. “It’s part of history. I grew up in Ironton and have lived here for 39 years.”

Cheryl Lawson, of Ironton, said she would miss the old span, which she said she always trusted.

“It was built with fine ARMCO steel,” she said.

The old bridge closed on Nov. 23, 2016, the same day its replacement, the adjacent suspension Oakley C Collins Memorial Bridge was opened to traffic. The main span of the bridge was cut loose and lowered to a barge in January. Crews spent following months gradually dismantling the remaining sides.

Brayman, who built the new bridge, assumed ownership of the old bridge under the contract. The company has been scrapping the sections of the bridge to recycle the steel.

One of the arches of the bridge has been preserved. Ironton Mayor Katrina Keith said the city has put in a request to keep it as a memorial to the structure, to be erected near the site.

– For photos from the bridge’s closing and dismantling, check out this Sunday’s Focus page in the Tribune.

Senior Citizens Day at fairgrounds sees more than 1,500 in attendance ROME TOWNSHIP — “We couldn’t have asked for better... read more