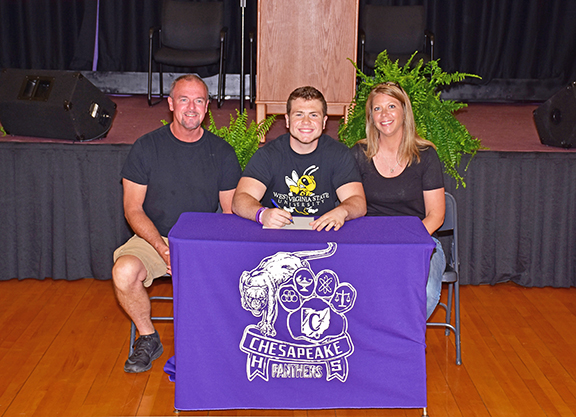 CHESAPEAKE — Don’t be surprised if you see Brendan Meadows taking his bus driver’s license test this summer.
A three-year starter for the Chesapeake Panthers, Meadows is just looking to earn some playing time his freshman season after signing with the West Virginia State Yellow Jackets on Friday.
Getting playing time will put Meadows on the travel squad as a passenger, not the bus driver. Either way, it’s all good to him.
“I want to get some playing time right off the bat. They said if you can get on the playing field you can get on the bus, so I can travel with them. I’m going to try and get on the field so I can be on the bus with them and travel to games,” said Meadows.
Chesapeake head coach Andy Clark said if Meadows has a goal of getting playing time and making road trips, there is a good chance he will achieve that early goal.
“He’s the kind of player you want all your kids to be like. He works extremely hard. He’s got a motor that every drill, everything you do in practice is 100 percent. He cares about his teammates, he cares about his team,” said Clark.
“He’s passionate about everything he does. Outside of being a great high school player, he’s an even better kid. He’s the kind of kid who if he continues out to have that kind of passion for what he wants to do, he can do what he wants to do in life.”
The 6-foot, 215-pound senior was not only an Associated Press All-Southeast District first team selection, he was voted the Defensive Player of the Year and earned first team All-Ohio status.
Meadows visited others programs such as Capital and Wittenberg, but those schools could not offer money with their NCAA Division III status.
In order to play football and get some money, Meadows opted for West Virginia State.
“It was a good fit for me. I liked the energy there and the environment and the coaching staff. They have good goals. One of their goals is a national championship,” said Meadows.
“They were on a rebuilding year last year but all ready one of their goals was a national championship and I liked that. And they were real confident about that. Even with a new coaching staff they still believe that’s obtainable and I like that.”
WVSU assistant head coach Travis Everhart said Meadows would be an H-back which is similar to the fullback position in high school.
“I’ll be going out and blocking people, blocking linebackers and lead block, maybe go out for a pass or two,” said Meadows.
“I probably wouldn’t be on defense., but I’d go anywhere they’d want me to play. I loved playing defense. I loved playing defensive end in high school, but I love football most of all so I don’t care what kind of position I play. I’ll be a kicker if I have to. I just want to go and play some ball.”
Brendan — who plans to major in education and wants to coach eventually — is the son of Darrell and Missy Hall.
“I want to be a coach for sure when I’m done with school,” said Meadows.