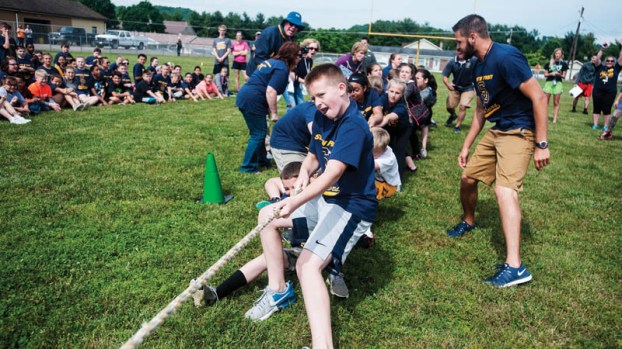 Cannon Lewis takes the lead with his classmates from South Point Elementary in a tug of war battle against Burlington Elementary during field day.

SOUTH POINT — South Point’s two elementary schools, Burlington Elementary and South Point Elementary, maintain a bit of a rivalry, but, as is the case each year, the two came together for two days of fun to wrap up the school year.

The sixth annual joint Field Day took place Monday and Tuesday at South Point Elementary, and Burlington students dropped by to face their district rivals in activities like tug-of-war, sack races and the 50-yard dash.

Monday was devoted to students in kindergarten through second grades, while the schools’ third through fifth graders took part on Tuesday.

Michael Clay, the assistant principal for Burlington, said the event comes together through the work of faculty and community volunteers.

He cited one person in particular, Larry Fox, who along with a friend, was grilling hot dogs for the students to enjoy after finishing up the events.

“He comes every year,” Clay said. “He had a child who went through the school, but he’s been gone three or four years.”

Clay said, in addition to about 15-20 parent volunteers, there were a number of South Point High School students also helping out.

The two-day competition wrapped up as it does each year with the fifth grade tug-of-war.

The victorious school gets to claim a trophy, which floats between the two locations.

The rivals and soon-to-be fellow South Point Middle students, faced off, and the result meant the trophy stays in its current home for another year.

“We won again,” a proud Clay said. “This is the fourth year in a row.”
South Point schools end their school year this week, with a fifth grade graduation set for each elementary on Friday.

SHERIDAN — Lawrence County sheriff’s deputies responded after a body was found on Sunday in the Sheridan area. A kayaker... read more