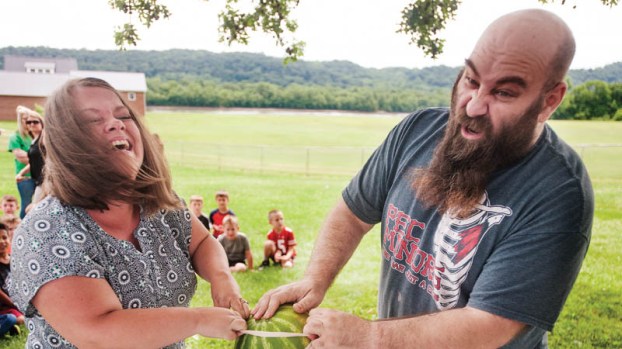 Jackie Callicoat, left, reacts to the possibility of having a watermelon explode during an end of the year celebration party at Fairland East Tuesday. Joe Hamden, right, was conducting an experiment with students and faculty to see how many rubber bands it takes to make a watermelon explode.

ROME TOWNSHIP — The academic year ends on Thursday at Fairland East Elementary and, on Tuesday, students got a chance to enjoy a day dedicated to the milestone.

An end of year celebration took place at the K-2 school, offering a variety of activities.

Jennifer Graham, the school’s guidance counselor, said it was an opportunity to close out a successful school year. One of the day’s events was “Mr. Joe,” Joe Hamden from Marshall University’s College of Science.

“We had him last year and the kids just loved it,” Graham said, stating that he offered colorful Bill Nye the Science Guy-esque demonstrations for the students.

Hamden, who was presenting along with his son, Joseph, said it was part of the university’s outreach program, now in its third year.

“It’s limitless what you can teach,” he said.

Hamden had several watermelons on hand, and asked the students, followed by faculty, to come and place a rubber band around one, creating force to make the melon explode.

“In addition to the physics, you can show the kids that, when you work together, you can do crazy things,” he said.

In addition to the science show, stations were set up where the children could get sno-cones or take part in dancing with a DJ.

In the gymnasium, Ashley Parker and employees of Texas Roadhouse in Huntington were offering face painting and leading the students in line dancing.

“It’s a way for them to engage the community,” Graham said of the business. “I think it’s awesome.”

Parker said the Huntington location just opened and the event was a chance to introduce themselves  to the region.

“We really wanted to get out into the community and be involved,” she said.

NELSONVILLE — The Wayne National Forest is extending hours of operations for select offices to enhance visitor services to the... read more