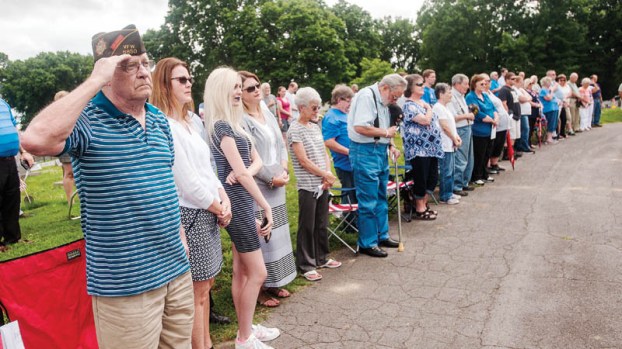 Tom Stambaugh, with VFW 8850, stands at attention during the Gunnery Salute at the Veterans Memorial Service Sunday in the Soldiers Plot at Woodland Cemetery.

As is the long-standing tradition, people gathered at the Soldiers Plot in Woodland Cemetery in Ironton to honor the fallen military men and women of Lawrence County interred there.

Attorney Mark McCown, emcee of the event, said it was a day of remembrance and the price paid for peace.

“The cost of freedom is high,” he said. “As even today, we see thousands of people around the world, soldiers and citizens alike, rise up against tyranny so that they may gain a taste of the freedom’s we hold so dear.”

There are around 1,000 veterans buried in Woodland Cemetery.

“They deserve our honor, our respect, and our memory,” McCown said. “And today, we honor them.”

The veterans’ graves were marked by an American flag, made in Cincinnati. The flags were placed by volunteers and members of the Ironton-Lawrence County Memorial Day parade committee.

He said the Ironton-Lawrence County Memorial Day parade theme of “Peace Through Strength” needs to be at the forefront of our thinking as responsible citizens. He said the world has changed as terrorism has affected the world.

He said “Peace Through Strength” from the time of Moses to Roman emperors to former President Ronald Reagan.

Reagan’s thought was to build our military forces to be so strong that our nation’s enemies would fear us and our allies would trust us so that we would never have to use those forces.

He went on to say it isn’t just the military that needs to be strong and that it isn’t just doing military service that can be of service to America. He said that people can do things in their own community from helping to those who seek bettering their current situation to just checking in on an elderly person who may be lonely.

“We can share some of our time, talents, love and maybe even a few dollars,” Belcher said. “Let us seek out those we may add and encourage. It is a choice. Will we step up?

He also called to support military personnel and their families.

“Do we each have a role in peace through strength, I hope you all agree that we certainly do,” Belcher said.
2017 Parade Grand Marshal Herb Brown, 2017 Honorary Parade Marshal Adam Koster, and 2017 Parade Commander Brent Pyles placed three wreaths on the monuments dedicated to fallen soldiers.

VFW Post 8850 of Ironton provided the honor guard for the ceremony.

Nearly half of class graduates with honors Symmes Valley High School celebrated the graduation of their seniors on Friday, with... read more