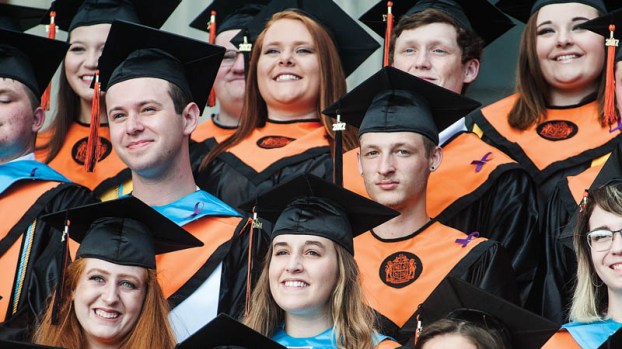 Students from the Ironton High School graduating class of 2017 pose for a class photo on the steps of the high school.

On Sunday, the Ironton High School class of 2017 gathered on the steps of the high school to get their final class photo taken before their graduation.

After 12 years of schooling, most seemed ready to move on.

Chase Rowe was one of them.

“I’m feeling great,” he said before the graduation ceremony. “I’m ready to get on with my life, ready to take my education I’ve gotten and apply it to my future and hope for the best.”

He’s heading to Columbus in the fall to attend The Ohio State University, where he is going to study biology as an undergraduate and then study to become an interventional radiologist.

“I’m not nervous,” he said. “I feel like Ironton High School has prepared me and I know I can do what I want to do with the education and the determination I have.”

Chase Rowe is a member of the National Honor Society, the football team, and Quiz Bowl team.

One thing that will be odd for him is that in college, he won’t have his father there. His dad is Joe Rowe, the Ironton High School principal.

“IHS will always hold a special place in my heart,” Chase Rowe said. “I am going to miss the small town feel, but I’m ready to step into a big city. I will miss my parents being there for me everyday, but it is going to be an adventure.”

Kara Spencer too is ready to move on from high school, but she’ll be staying in Ironton.

“I’m feeling great, I’m so excited to graduate and start a new life,” she said. “It’s going to be awesome.”

Kara was the treasurer of the National Honor Society, was on the tennis and bowling teams, and was a varsity singer.

She is going attend Ohio University Southern to become a social worker.

“I will miss the people,” she said. She added she was nervous about speaking at graduation but as for the future, “I am ready for it.”

IHS Principal Joe Rowe said the Class of 2017 has been a wonderful class.

“Academically, one of the strongest we’ve had in years,” he said. “I believe we have 10 students out of the 92 graduating today that have above a 27 on the ACT. They are well over a million dollars in scholarship money. So we have a Million Dollar Marching Band and a Million Dollar class.”

He said it was one of the most nurturing classes he has seen.

“I know this class will definitely leave its mark on society,” Joe Rowe said. “First of all, they have outstanding character. They have compassion for one another, I haven’t seen that for awhile, they genuinely care about each other.”

SOUTH POINT — On Sunday, 99 South Point seniors said goodbye to high school and moved on to the next... read more