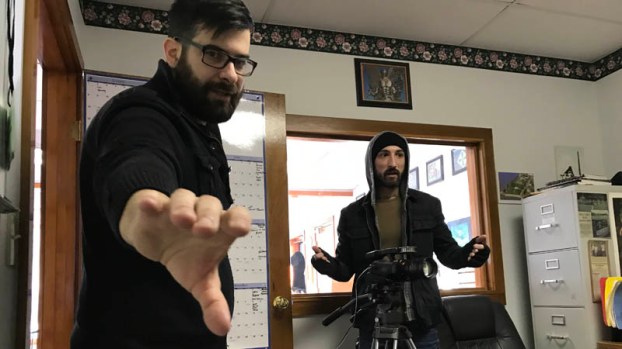 Director and producer Seth Breedlove, left, reaches for a camera while director of photography Zac Palmisano stands by.

The Mothman of Point Pleasant is the fourth film from Small Town Monsters, and arguably their best effort yet.

The documentary, the first to focus on a subject other than Bigfoot, takes a look at Mothman and all the high weirdness centered on Point Pleasant between November 1966 and December 1967, culminating with the collapse of the Silver Bridge.

Small Town Monsters covers all the bases covered by other works on Mothman; the Chief Cornstalk curse, the big bird, the UFO sightings, the Men in Black, Woodrow Derenberger and Indrid Cold, and the collapse of the Silver Bridge 10 days before Christmas. But they also reach back even further, interviewing locals to determine the possible origins of the Cornstalk curse legend, and uncovering reports of the “big bird” going all the way back to 1914, more than 50 years before the phenomenon would capture the world’s imagination.

They also discuss other sightings in the area, from the “flying man” reported by gravediggers in Clendenin, just days before the Mallett/Scarberry sightings that would launch the big bird into the national spotlight, to rarely discussed reports of the bird and a “bat man” from the suburbs of Charleston.

Another way the Mothman of Point Pleasant differs from many other documentaries on the Mothman is by addressing all of the “high strangeness,” a term coined by Mothman Prophecies author John Keel, that surrounds the phenomenon.

The Mothman of Point Pleasant doesn’t take a position, but gives voice to those who feel the Mothman was everything from a big bird of some sort to an alien from space to those who felt he was an evil spiritual or demonic entity. It even discusses the seemingly B-movie inspired idea that the creature was a mutant caused by the toxic waste of the TNT area.

The film makes excellent use of archival footage and audio recordings collected or made by Jeff Wamsley, of the Mothman Museum, and arguably the man, besides John Keel, most responsible for cataloging and maintaining the popularity of the Mothman legends.

Likewise, a timeline effect used in the background throughout the film helps place sightings and events in the proper chronological context.

Lyle Blackburn, who worked with producer and director Seth Breedlove on his previous film, the critically acclaimed Boggy Creek Monster, is back on the Mothman of Point Pleasant, as co-writer with Breedlove and providing narration.

While Blackburn’s pronunciation of some place names can be a bit jarring to local ears, that’s an observation born of looking for something to criticize. All in all the film is a treasure.

Good writing and fresh perspectives and content, and a score by Brandon Dalo that perfectly compliments the various moods of the film, make it a worthwhile watch for both Mothman neophytes and seasoned researchers.

The film is available for rent or purchase now on Vimeo and Amazon, or as a physical DVD from the Small Town Monsters website at www.smalltownmonsters.com/films.html. A release on iTunes will follow shortly.

For serious students of the phenomenon, I would recommend purchasing the film from Amazon, or downloading the film if you plan on using Vimeo. The films’ timelines and use of documents from the Keel and Wamsley archives will make some of you want to rewind and pause to examine them more closely. Doing so on a streaming version of the Vimeo copy on a smart TV app lead to the video freezing while audio continued, and other glitches that made the experience less than ideal. While an Amazon version of the film was not available to preview, this problem has not been as common with Amazon streams in the past. A DVD version of the film, of course, would resolve any problems related with bandwidth or streaming glitches.

Breedlove’s next film, Invasion on Chestnut Ridge, examining the Kecksburg, Pennsylvania, UFO crash, is already in production. If it follows the trajectory of Breedlove’s other films so far, expect even better production value and storytelling, as the Small Town Monsters crew continues to hone their craft and produce compelling and entertaining content.

She must work in the woods

Iran across some interesting advice in The New Yorker from the renowned self-help guru Yoko Ono. She is quoted as... read more