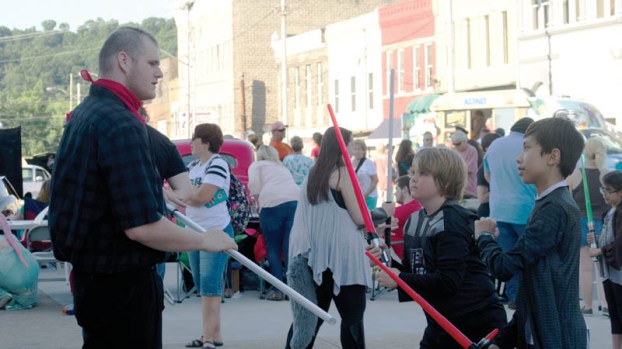 Members of the Imperial Legion of Ashland instruct children on how to use a lightsaber at the First Friday Star Wars-themed event.

The Force comes to downtown Ashland

ASHLAND — Star Wars may have turned 40 years old last month, but fandom shows no signs of slowing down.

The film saga was the theme for the First Friday event, hosted by Ashland in Motion, for the weekend at Judd Plaza.

The event featured choreographed lightsaber battles, from a local group, the Imperial Legion of Ashland, a raffle of items from Superhero Creamery and Time Warp Games and Collectibles, and a costume contest.

“It’s a charity drive. Our donations are going to Pathways. Unofficially, it’s in memory of Carrie Fisher,” David Rowe, of the Legion, said of the actress who portrayed Princess Leia. “She died about six months ago and was an advocate for mental health issues.”

He said the group was also instructing people on lightsaber skills.

Live music from Outrider took place on the main stage, the Underclassman performed at Estate Thirty3 Vinyl, while Of the Dell appeared at Kentucky Residential Arts and Music.

For more about First Friday and other upcoming events, visit www.ashlandinmotion.org.

Ironton In Bloom Yard Tour set for next Sunday

Tickets on sale up to day of June 11 event Ironton In Bloom is inviting the community to see some... read more