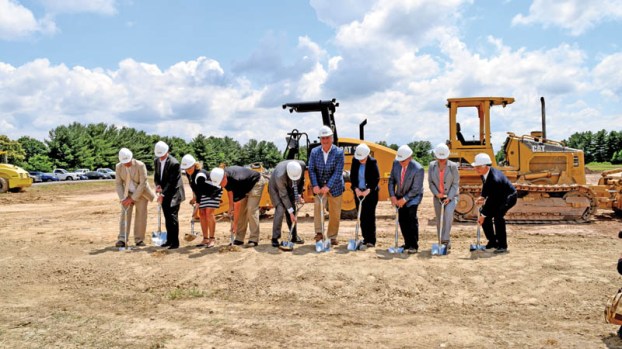 HWI has groundbreaking for $30M facility in South Point

SOUTH POINT — Trains rumbling by in the background occasionally drowned out speakers at the groundbreaking on Thursday, but they spoke as clearly to the reason for HarbisonWalker

International’s choice of The Point Industrial Park as anyone behind the microphone could.

Friendly interactions and good working relationships with the community are important, but without the transportation infrastructure needed to support the flow of raw materials into the plant and to get finished products out to market, a site won’t work for a company.

Doug Hall, Senior Vice President, Integrated Supply Chain for HWI, made it clear even as a passing train interrupted him with its safety whistle that this was an important consideration for HWI when they considered sites for their new $30 million monolithics facility.

“That’s an important reason,” he said, indicating the train as he waited for it to pass to continue.

The nearby river port is also an important feature, as Carol Jackson, Senior Vice President,

General Manager of HWI, explained in remarks prior to the groundbreaking ceremony.

“Our company went through a rather lengthy and rigorous process to qualify candidates and finalists for locations,” Jackson said, “and certainly we were looking for a location that was proximate to the water, for transport of raw materials, and arguably finished goods, depending on our logistics that we’re planning from this facility. So there were certain transportation efficiencies considered, as well as proximity to current raw material suppliers, and also central location to our distribution network. Where we actually ship product, finished goods, to our customers.”

But local involvement also influenced their decision, she explained.

“So, among those things, that lead to a selection process,” she said, “and then it came down to who wanted it badly enough, and quite frankly, the South Point community, the LEDC, the Chamber of Commerce, really distinguished this area from the very beginning. In terms of ease of doing business, from the initial conversations all the way through the process, to, certainly, the grants available and the financial incentives to locate here. Proximity to the opportunity to get good labor was also a factor. Just pretty much in anything and everything, South Point distinguished itself.

So, through this process, South Point was always one of the top three in the process, and we’re here. And we’re happy to be here, and glad we made that selection. It was reinforced today, quite frankly.”

She further explained that the confluence of various modes of transportation at the site had others at the company excited as well.

“We were just having a conversation with our leader of our distribution network, John Rosenecker, who runs our distribution network and our internal supply chain efforts, from our plants to our customers,” Jackson told The Tribune, “and one of the things we were talking about was the potential to actually locate a hub for our finished goods. Storage, so we can further transport. So rail traffic, depends on the customer, depends on what we ship out of here. We’ll be shipping by truck. We’ll be shipping by rail. We intend to use all forms of transportation. Whatever meets the needs and is the most efficient for us.”

Jackson also provided a little background on monolithics, which includes a variety of custom made materials used in a variety of industries, especially in metallurgical uses, like for holding molten metals.

“So, if you think of bricks and mortar, simply, building a house, now I’m using that as a way to illustrate the products,” Jackson said. “Bricks are solid forms, solid shapes. That’s what the South Shore, Kentucky, facility would make. They make bricks. Very important bricks. Highly functioning bricks. Ceramic technology. Monolithics are the mortar, effectively, that holds it together. So, the distinction there, again that’s for illustration of what they look like, but ultimately where our products end up, because they’re high performance products, (built for) heat durability (and) chemical resistance, our products end up in pretty much everything that’s manufactured, the operation to make them. Whether it’s a steel ladle, that makes steel (into) molten steel, glass manufacturing, cement kilns, you name it, refractory is needed because of the ability to deal in these intense work environments.”

The groundbreaking ceremony itself opened with a flag presentation ceremony from Ironton Boy Scout Troop 106, welcome by Jackson, invocation by the Rev. Jack Finch of the Tri-State Bible College, and statements from South Point Mayor Jeff Gaskin, HWI Chairman and CEO Steve Delo and facility unveiling by Doug Hall.

“Our new South Point plant exemplifies the future of our company,” Delo said, “and in many ways the future of the U.S. refractories industry. We’re leveraging our 150 years of leadership and expertise to reinvent how we produce and deliver quality monolithic products.”

“The new plant will have a positive impact on product consistency,” Delo continued, “and quality, availability, ordering, packaging and support. We are thrilled to officially launch this very important initiative today.”

Dr. Bill Dingus, PhD, Executive Director of the LEDC and John Molinaro, President and CEO of the Applachian Partnership for Economic Growth, also spoke briefly on the importance of the facility to future growth in the community and area, including to attracting and maintaining other related industries.

HWI also kicked off its groundbreaking with a gift to the community, presenting Jayshree Shah, of the Tri-State STEM+M Academy with a check for $1,800 to benefit the school.

Final positions to be created for the facility are still being determined, but details about available positions, including job descriptions and requirements, will be posted online as they are determined. Updates can be found at http://thinkhwi.com/south-point-plant/.