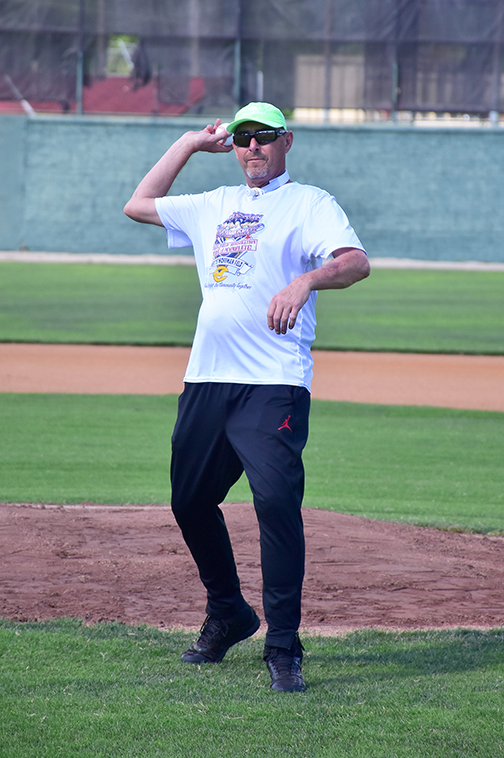 Tommy Pinkerman throws out the first pitch prior to a Del Rice Summer League baseball game on Wednesday. Pinkerman — a Navy veteran — was being honored after beating cancer for the second time. (Kent Sanborn of Southern Ohio Sports Photos)

PORTSMOUTH — Tommy Pinkerman is one of those rare individuals who can make the Grimm Reaper feel really depressed.
For the second time in 10 years, Pinkerman has found himself in a battle with cancer. And for the second time the local referee, umpire and youth league coach has won his battle.
Reports on Pinkerman’s health in recent months, weeks and days have had Pinkerman clinging to a thread.
“I’ve got no complaints. They told me I was going to die. They told me that twice,” said Pinkerman. “But I’m a fighter. The good Lord could take me tomorrow, but I’m here and I’m fighting.”
Lying in a hospital several weeks ago, doctors didn’t see much of a hope for Pinkerman. He was told he had maybe a week to live. Pinkerman wasn’t going to take the prognosis laying down. He got up and headed to the James Cancer Research Center in Columbus.
“They had a guy there from Germany and he was showing them how to use lazers. I had some places on my hip and I watched the monitor as he lazered them and I watched them disintegrate,” said Pinkerman.
“It was amazing. I asked him how long before they would come back. He asked me how long it was before these came back and I said about 10 years. He said it would probably be another 10 years. I said I’d take that.”
Pinkerman is now up and moving around. He hits the golf course almost every morning at 7 a.m. He may miss his round on Thursday because he is having a trachea removed from his throat.
“They said no one who has had two tracheas is able to talk. I have two vocal chords damaged. I told them they didn’t know me very well. There’s not much that can keep me from talking,” he said with a laugh.
A Navy veteran, Pinkerman was all smiles and honored as he was asked to throw out the first pitch before Wednesday’s game in the Del Rice Summer Baseball League.
He was accompanied by five other Navy veterans in uniform as he was introduced to the two teams and crowd.
Pinkerman spent 30 years as a youth league football coach. He never had a record worse than 8-3, he had seven unbeaten teams, 17 teams in the Teen OVC Super Bowl and he won seven championships.
He was a basketball official for 26 years and baseball umpire for eight years. He has also officiated football.
And he plans to return to officiating at some level.
“I love the kids. They’re the reason I do it,” said Pinkerman.
And the kids love him.
Pinkerman said he received 4,700 emails from kids he had coached and players and coaches from games he officiated.
He had planned to paint his garage on Wednesday but South Webster coach Ron Fenton told Pinkerman, “You ain’t going to do nothing. I’ll send some of my players. They did it in five hours.”
Although Fenton refused any payment, Pinkerman said he was making a $300 donation to the athletic department.
Pinkerman’s first bout with cancer came in 2008 when he contacted pneumonia and went to the doctor where they discovered he had cancer. And not only was it cancer, it was Mesothelioma, a form that spreads rapidly.
“(Radiologist) Dr. Ben Roach saw it and he said, ‘you need to see a doctor.’ Four days later they took part of my lung out,” said Pinkerman.
Pinkerman took 16 weeks of treatment and began officiating again but his legs went numb one night. He was diagnosed with Neuropathy — a degeneration of the nerves — and it forced him to retire from his job as a mechanic at CSX. He actually had to learn to walk all over again.
But less than two years later, Pinkerman was back on the basketball court.
And sitting in the bleachers virtually in tears was the Grimm Reaper.
Tommy Pinkerman will do that to you.