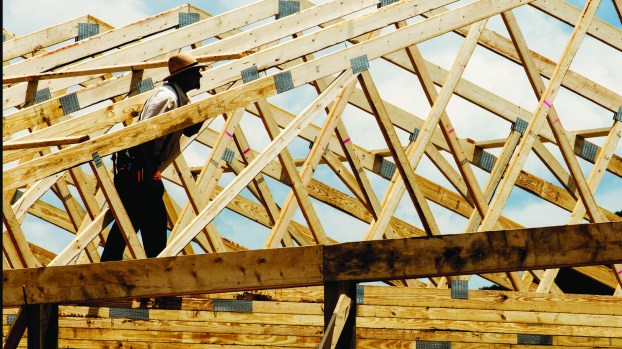 Fixing up the fairgrounds – grandstand getting new roof

While the Lawrence County Fair doesn’t begin until July 9, there are crews already working on beautifying the fairgrounds.

The most visible is a new roof being put over the grandstand seats.

“We’re just improving it with a new roof,” said Steve Walters, the groundskeeper at the fair grounds. “We want to make it better for the public. It was old and needed a lot of repairs. We patched for years and we figured it was time to do it up good.”

The new wooden framed structure replaces a roof that was built in the 1960s or 1970s.

“They’ve been working on it for about 10 days,” Walters said on Tuesday. “They say it will be done in about two weeks, right before the fair.”
Besides the new roof, crews are touching up red paint all over the fair buildings and grandstand, and a lot of yard work.

“We got lawn mowing going, weed eating going, painting of buildings and then we’re good to go,” Walters said. He starts mowing the acres of the fairgrounds in April and continues right up until the day the fair starts. “There’s a lot of work involved in it. We start on Monday, run until Friday and then start again on Monday.”

The pre-fair starts on July 7 with Motocross for entertainment. Animals arrive at the fairgrounds on July 8, with several derbies throughout the day.

Daily admission is $10 with free rides and grandstand. Parking is $5. For more information, go to www.lawrencecountyohiofair.com.