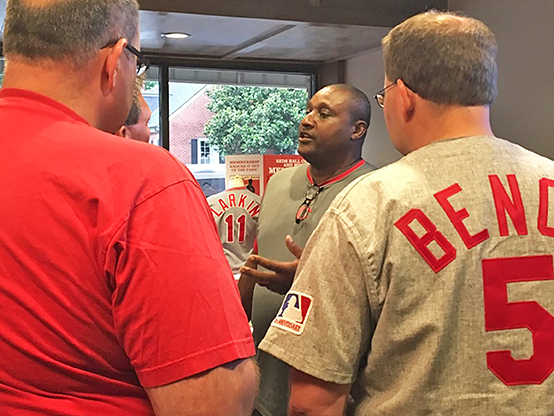 HUNTINGTON, W.Va. — Herm Winningham is a winner. He can’t escape it. After all, it’s in his name.
Winningham was the guest speaker who also took pictures and signed autographs during the Tri-State area stop of the Cincinnati Reds’ Hall of Fame Chapter on Wednesday.
Winningham spoke for an hour and a half before answering questions. The former Reds’ outfielder was enthusiastic, entertaining, witty, informative and personable as he regaled members of the Reds’ Hall of Fame Charter with stories of his life in baseball including the 1990 World Championship season.
Winningham said the 1990 team was built by Pete Rose with the exception of three players: pitchers Randy Myers and Tim Layana and first baseman Hal Morris.
The speedy outfielder said Rose was a players’ manager.
“Pete treated you like a man. You were expected to do your work and come ready to play,” said Winningham.
But when Rose was suspended for gambling in 1989, the Reds hired fiery Lou Piniella as the manager and he guided the team to a wire-to-wire National League pennant and a sweep of the Oakland A’s in the World Series.
“(Piniella) came in with both barrels blazing. He told everyone ‘I have eight guys who are going to play every day. Everyone else has to find his role.’”
Another difference was Piniella would fine a player for mistakes or a lack of hustle while Rose would “just jump all over you.”
He said Rose would also check with players — especially near the end of the season — to see if there was something in their contract that he could help them obtain in order to get a bonus.
Winningham told Rose that he need four more games. Rose asked, “You need to start four games?” Winningham replied, “No, just play in four more games. And Pete made sure I got in four games.”
One of the keys to the 1990 team was its camaraderie according to Winningham. He said the locker room wasn’t void of its fights and gave a few examples. But he said it was a very tight-knit and supportive group.
“We saw each other naked more than we saw our wives. On our day off we’d come by someone’s house. There’d be nine guys watching a game,” said Winningham.
“We’ve stayed in contact. We just jelled. We knew each other’s strengths and each other’s weaknesses. We knew who you were if we saw your shoes go by. We fought among ourselves, but not like today. I couldn’t play today.”
Winningham said the life of an athlete is hard on wives. He said social media can cause a lot of problems, especially divorces.
“The majority of our players are still with their first wife. The Reds cater to the wives. If the wives are happy, then we play better. That was the attitude the Reds had,” said Winningham.
Winningham went 2-for-4 in the 1990 World Series and scored the go-ahead run in Game 4. He said he always had a great work ethic and that he would try to be the first player at practice or a game and the last to leave.
“I’m never going to grow up. It’s a little boys game being played by men. The difference between you and me, you like baseball. I love baseball. It’s the greatest game in the world,” said Winningham.
“You have to have a work ethic and stick to it. I came early left late. I did it until the day I retired.”
The Reds Hall of Fame Chapter has a stop in Morehead, Ky., on Thursday. Additional future events will be announced.
To become a member of the HOF Chapter, contact Sherry Rowland, Reds’ Hall of Fame Museum membership coordinator, at (513) 765-7962 or email her at SRowland@reds.com
Additional information is available on the Cincinnati Reds.com website

ST. PETERSBURG, Fla. (AP) — This dash to third base was a bit different for Mallex Smith. The Tampa Bay... read more