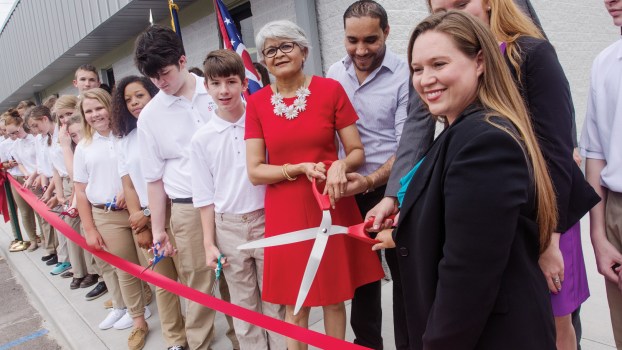 HE TRIBUNE/JESSICA ST JAMES Lead teacher Alicia Spears, right, with Jayshree Shah, in red, along with other factuality and future students take part in the ribbon cutting ceremony of the new Tri-State STEM+M school, in South Point on Thursday.

But there could be no doubt that the heart of the gathering was to honor the memory and contributions of the late Dr. Charles Scott Howard, who brought the STEM+M concept to Lawrence County and, as Shah put it, “single-handedly” made the school possible, laying all of the groundwork and preparing all the documentation and applications that would be necessary to start the school before passing away last year, including securing the $600,000 seed grant for the development of the school.

Shah and board member Jennifer Howard, Dr. Scott Howard’s widow, unveiled a design for a plaque featuring Howard that will grace the school.

Jennifer Howard, commenting on her late husband’s legacy, said that more than praising him, which was not what he would have wanted, “let’s do it for the students, because that’s what he was all about.”

Dingus said that despite Howard’s humility, he deserved recognition for having a vision of what our region needs, and a passion for bringing it to pass.

“These individuals,” Dingus said, indicating those like Shah that Howard put in place to fulfill that vision, “are committed to the region.”

“Scott said our kids deserve equal to what the metro kids have,” Dingus continued. But he went on to say that Howard’s vision was broader than just Lawrence County. Noting the Tri-State moniker, Dingus explained that Howard’s “vision was much larger” and regional based.

“This is much more than just a simple school,” Dingus said. “It’s part of a coming network.” One that, he explained, that will link high schools to colleges and to industry.

Shah finished the evening, noting that the school, which will serve only freshman its first year, “is all about the next generation.”

As it grows, she explained, eventually expanding to include the planned Point Occupational Health, Wellness and Training Center, to better complement the +M portion of the school, the school will “promote a culture of learning” where students will be encouraged to work cooperatively and, “solve authentic issues we face locally (and) globally.”