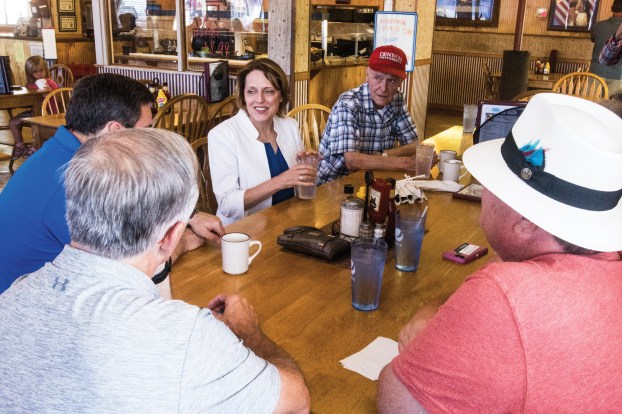 Connie Pillich, a Democrat candidate for governor, stopped by Ironton on Saturday as part of her tour of all 88 of Ohio’s counties.

She was at Peddler’s Restaurant to talk to local Democrats about getting nominated to run in 2018.

Pillich is touring all 88 counties in Ohio as part of her run for office and Lawrence County was halfway through the list.

“I wanted to visit and talk to people in every single county because I think a lot of these counties have been ignored for many, many years,” she said. “For me, as a candidate and as an officeholder in the past or in the future, it is really my responsibility to get to know as many people as I can and to try to hear what is going on in every community.”

Pillich served three terms in the Ohio House of Representatives from 2009 to 2015. She joined the U.S. Air Force as a communications specialist and served in Operation Desert Storm and Operation Desert Shield.

She was stationed in Biloxi, Mississippi, a nuclear missile base in North Dakota and then in West Berlin, Germany.

After leaving the military, she got a law degree and was a public defender as well as having a private practice, Webb & Pillich, LLC.
She said she has been in Ironton before, once because she had a case, and several times on the way to visit her husband’s relatives in Noble County.

One of the ideas Pillich has supported has been a healthcare buy-in. She said the idea of a public option is nothing new.

“I’ve been thinking for 10 years of offering, to any citizen, the chance to buy the same insurance offered to law makers or to any public employee,” she said. But it was when Anthem said they were going to pull out of the insurance exchange in Ohio and leave dozens of counties with no options that she knew something had to be done.

“The individual would pay the entire premium, so it won’t cost taxpayers a penny, but it does allow people to have health insurance,” Pillich said, adding that it could lead to lower insurance costs since the companies would be incentivized to offer  lower prices to be competitive.

“We need a healthy workforce, we need to everything we can do so our people can get jobs. We need health insurance to help fight the opoioid epidemic,” she said.

She said that the drug crisis needs to be fought in may directions, including having a job to support your family so you don’t self-medicate, prevention of drug use, effective treatment for drug addiction, family support so people can be helped toward recovery and enforcing drug laws to put pushers and drug dealers in jail.

“We have got to tackle this problem from all sides,” Pillich said.

She said she also supports infrastructure to create jobs including high speed internet in rural areas to support people who are coding computer apps to those selling products online.

“Ohio should be the leader in 21st Century jobs,” Pillich said. “We do have the best Midwest work ethic, we have the nicest people, we’ve got capacity since we have factories that are under producing. We have great schools. We should be able to bring these jobs here. We just need a relentless advocate to make that happen.”

Gov. John Kasich is term-limited because he has served two terms.

FLATWOODS, KENTUCKY — A Golden Alert issued for a Kentucky man has been canceled. The Flatwoods Police Department said they... read more