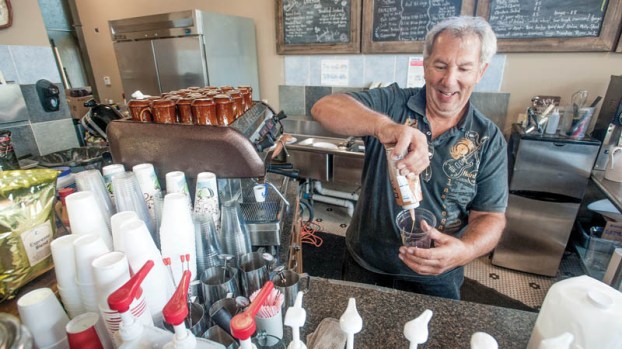 Richard Fisher makes one of the many coffee creations available at The Chatroom Cafe, located on the corner Vernon and South Second Street, in downtown Ironton.

Give the people what they want

The city of Ironton recently conducted a survey of residents, asking what kind of businesses they would like to see brought to downtown.

Overwhelmingly, respondents said they wanted a coffee house. And now, with the opening of The Chatroom Café today, they’re getting one.

“Same Heighton (executive director of Ironton aLive) took me to meet the mayor,” Robert Batchelor, the café’s owner, said of the beginning of his efforts to open in Ironton. “She asked, ‘What were you hinking of?’ When I said a coffee shop, she showed me the survey. It was the number one choice, by far.”

Batchelor said he was approached by the city about developing the space, the former site of the Transit Café at 225 S. 2nd St. after he had a small coffee shop at Ashland Community and Technical College.

Prior to his year in the coffee business, he worked as an underwater welder, traveling the country to work on projects one of which was early work on the new Oakley C. Collins Memorial Bridge connecting Ironton and Russell.

He said he is heavily invested in the coffee business, with his own roasters and grinders.

Opening in full at 6 a.m. today, the café, in addition to coffee, tea, chai lattes, soy lattes and Cuban coffees, will feature a breakfast and lunch menu, as well as desserts.

“Our breakfasts our homemade,” Batchelor said, stating they will offer biscuits, bagels, toast, croissants and breakfast sandwiches, as well as a breakfast platter with eggs, bacon, hash browns and toast.

For lunch, two specialty sandwiches will be available, a Monte Cristo and a Philly Cheesesteak, which Batchelor said has been the most popular at the limited opening on Tuesday.

“After the specialty sandwiches, we’re similar to a deli, where you can assemble your own sandwich with different cheeses and five types of bread,” he said.

For dessert, the menu will consist of cannoli and fresh-baked pies, cakes and muffins.

Batchelor said the café is only the first half of his planned operations in Ironton.

In coming months, he will convert the former Guy’s Flooring building into a restaurant, to be called Grillers.

“We’ve already done the design and layout,” he said. “We’re working with the city and hope to have it open within six months.”

He said the plan is to knock down a wall and have the two businesses connected.

When open, Grillers will feature a full outdoor kitchen, he said.

“We’ll have smokers and a grill,” Batchelor said. “All of our meats will be cooked outside.”

One of those working behind the counter at the Chatroom Café will be Richard Fisher, who formerly ran the House of the Risen Son coffee house in the 1970s and the Fishnet Café in the 1980s.

“He’s been in this business since the 1970s,” Batchelor said, adding that he first met Fisher as he was taking down his equipment at a city event.

“I came over and, when I saw the espresso machine, I said ‘This guy is serious,’” Fisher said.

Heighton said Batchelor has been “very patient” in working to get permits and applications to open his shop.

He was looking for a downtown location,” Heighton said. “He’s going to be a good pick for the city of Ironton.”

The Chatroom Café will be open Monday through Friday, 6 a.m.-9 p.m.

Ironton aLive hosted their third annual Taste of Ironton event on Saturday, at the Ironton Farmer’s Market on Second and... read more