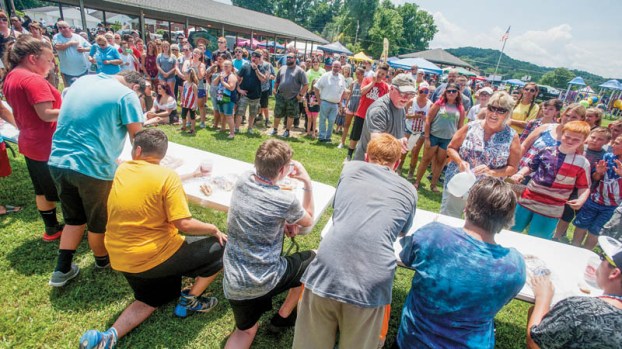 A crowd gathers at the performing stage at Party in the Park to cheer on contestants in the annual hot dog eating contest Saturday afternoon. Nine contestants attempted to gobble 10 hot dogs in record time.

Partying in the park

SOUTH POINT — Saturday was the fourth annual Party in the Park and the South Point Community Park was packed.

The organizers were hoping for a bigger crowd this year and the warm weather seemed to be helping them achieve that goal.

“It’s been going great so far,” said Lisa Irish, secretary for People For the Point, in the mid-afternoon.

She said that the weather had worked in the event’s favor.

“Some of the people, especially vendors were worried, that the weather was going to be bad. But we go, rain or shine. We don’t control the weather, that’s up to senior management.”

Irish said they don’t keep an exact number of people who attend the event but they had an estimated 12,000 people throughout the day last year.

“And we are on track to do that this year,” she said. “Last year, it was hotter. I’m looking at the lines and they seem bigger than last year.”

There were kids checking out the petting zoo with fuzzy chickens, rabbits, llamas, donkeys and horses. Little kids bounced on the inflatables. Show cars and trucks lined the road.

Musicians played from the main stage throughout the day.

Nine kids competed to see who could finish 10 hot dogs first. The winner, for the second year in a row, was Drew Bartram. He polished off 10 hot dogs in about six minutes. Most of the contestants had eaten four or five in that time.

There was also a contest for the most patriotically-dressed dog, a fun walk for the kids, a 5K run and a cornhole tournament with 20 teams competing for top place.

“All in all, I think it’s a bigger crowd than last year,” Irish said. “And we hope to be bigger next year.”