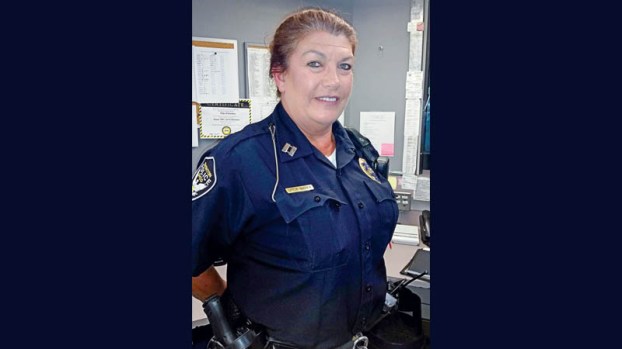 Pam Wagner has been named as the new police chief for Ironton. THE TRIBUNE/MARK SHAFFER

Wagner has been with department for two decades

The Ironton Police Department has a new police chief.

On Thursday, Captain Pam Wagner found out she had gotten the highest score on the Civil Service Commission examination to become the department’s next chief. There are four captains, but only three took the test.

“Mayor Katrina Keith informed me (on Wednesday) that I was awarded the position. It kind of hasn’t sunk in yet, but I look forward to the challenge,” Wagner said, adding she never expected to be a police chief. “I never thought the opportunity would present itself. I’ve been here almost 21 years, and I just never thought I would even had an opportunity to even sit for the test. So I was quite shocked when I was offered the position.”

Wagner has been a captain for four years and was the road captain for the evening shift. She joined the Ironton Police Department 20 years ago as a road officer after being a police officer in Proctorville and a Lawrence County Sheriff’s special deputy, dispatcher, jailer and process server.

As for plans as the new police chief, she said since it is her first day, it’s a little overwhelming but she would like to work more with the schools.

“I would like to get a school resource officer and be able to do more things with the kids in the community,” Wagner said. “Of course, we have a huge drug problem. I have a conference and seminar set up on that with other people to see what they do about it and what we can do about it. There is no cure all for the problem, obviously.”

She said the police department needs additional manpower and it is a priority to get more staff.

“It depends on the city council and it depends on federal government funding, if there are grants available for certain things, so we can free up money in other parts of the budget to make things work,” Wagner said. “But it just my first day, we’ll have to see how things work out.”

Wagner said she is a person who looks forward to the challenges that come her way.

“I’m kind of an extrovert, I like having things that make me think,” she said.

She is married to David and has three children and three grandchildren.

Wagner lives in Coal Grove. She is a Lawrence County native who went to Coal Grove High School. She is a 1992 graduate of Ohio Police Academy and has taught three police academies.

“So I have a lot of experience, but nobody knows it all,” Wagner said. “I will be relying not only on the members of my department, but other agencies that can help us.”

Wagner will be sworn in Monday at 5 p.m.

The police chief position was open after Dan Johnson stepped down to captain in February after being chief since 2013. Detective Capt. Joe Ross was the interim police chief for the past five months.