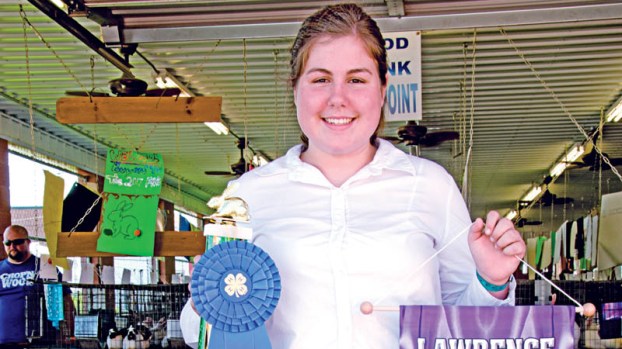 Maggie Ashworth was the senior grand champion in the rabbit showmanship competition at the Lawrence County fair on Wednesday.

ROME TOWNSHIP — Wednesday was the second day for farmers to present their rabbits to the judges as two competitions took place at the Lawrence County Fairgrounds.

The day started off with the rabbit showmanship event, in which entrants were judged on their ability to present the animals.

One of those taking part was Grace Stallo, 10, of the Greasy Ridge Gang 4-H club.

“It’s my second year,” she said, and explained that she received her rabbit when it was about five to six weeks old.

“We bring them to the fair after about six months,” she said.

She went on to place third in her age bracket in the event.

Haley Ward said she had received second place in her category at Monday’s market rabbit show. Now she was there to share information on her animal.

“They see what you know about the parts and everything,” she said. “And how you handle the animal.”

Jacob Napier, 11, of the Getaway Go-Getters 4-H club, said he was returning for his second year.

“I got third place in the rabbit show,” he said of Monday’s event.

He said the rabbit he was entering was two months and a week old.

“I have a lot more at my house,” he said. “My family breeds and sells them.”

Judges Tim Branham and Danny Long evaluated the entrants in two groups — junior entrants, who are age 8 to 13, and seniors, ages 14 to 18.

A South Point resident, she said she has been raising rabbits for seven years and has more at home.

“I won once, when I was a junior, but this is my first time as a senior,” she said.

Coming in next as reserve champion was Abigail Patterson, 15, of Kitts Hill and a member of the Getaway Go-Getters.

She was last year’s grand champion in the junior category, as well as the fair’s princess for 2016.

In this year’s junior competition, the grand champion was Brea Belville, with Tessa Shelton named as reserve.

As the showmanship competition wrapped up, judges started on the breeding rabbits competition.

Where most of the rabbits in the previous contest were white albinos of roughly the same size, this event had the aspiring farmers present animals large and small in a variety of breeds.

Montana Runnels, 17, of Scottown, was named grand champion overall in the breeding completion.

A member of the Greasy Ridge Gang, she was last year’s market rabbit grand champion and has amassed several trophies in her years in 4-H.

Coming in as reserve champion for breeding  was Megan McComas.

The market rabbit competition took place on Monday and Leah Gorby was named grand champion, with Heidi Sites as reserve.

Four counts include theft of a credit card, theft of a handgun and two charges of burglary Judge Charles Cooper... read more