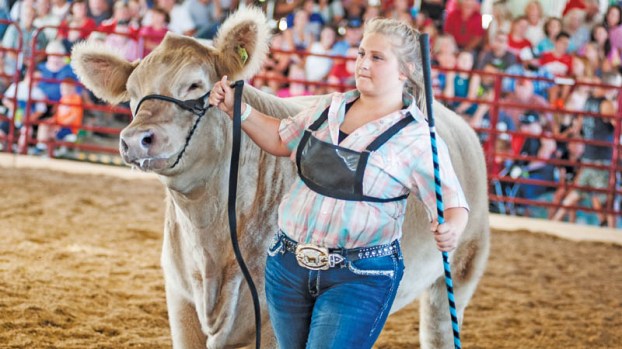 ROME TOWNSHIP — Matison Klaiber was already having a great week at the fair.

Just three days before, the Symmes Valley High senior had been named the Lawrence County Fair Queen, then, shortly after Wednesday’s market steer competition began, she and her animal placed first in her class.

“I’m just so excited,” Klaiber said, ecstatic, while waiting at her steer stall after the round.

“That’s my cue,” she said, then hurried off to take part in the final drive, alongside nine others who came in at the top of their classes.

Shortly after, when all was said and done, Klaiber, 17, was named the grand champion of the event, taking home the top trophy.

“It felt pretty great,” Klaiber, of the Gingham and Denim 4-H club, said of her win with the animal. “I knew he was pretty good and felt good about what would happen in the ring.”

And coming in just behind her was Maddy Calaway, 16, the fair’s princess, making it the second time the two had won together.

Calaway, 16, of Scottown, and a member of the Getaway Go-Getters 4-H club, cried tears of joy when her name was announced.

She said it was her third year at the fair and that, last year, she was named grand champion in the feeder calf competition.

Entrants in the competition were judged by Reagan Bowman, who said he has been doing shows for 30 years, including several times at the Lawrence County Fair.

“Last year, I did the feeder calf competition,” he said.

Bowman said when judging the steer show, he looks primarily for three things.

“Confirmation, the animal’s finish and whether it’s ready to go to market,” he said.

Once the animals were judged, entrants came to the ring for the showmanship competition, where Bowman said he considers the entrant’s knowledge of the subject and control of the animal and ability to get it into proper position.

“This is about you,” he told the entrants. “And about getting the animal presented.”

“What really made this young man jump is head is his knowledge of the anatomy,” Bowman said of Morris.

In the junior category, the grand champion was Enola Cade, with Brandon Fout as reserve.

She said she has been taking part in shows for three to four years and, in her first year, had won in showmanship.

Fout, 10, of the Willow Wood Wranglers 4-H club, said he has been doing it for two years. This was his first big win at the fair.

“But I’ve won at open shows,” he said, noting a recent victory in Zainesville.

He said he loves what he’s doing and plans to keep going as long as he can.

“That’s a good kid,” Bowman, impressed by Fout, said, adding that the boy told him he “was in it to win it.”

Bowman paid tribute to all the entrants, and those who helped them.

“It’s a long, hard project and takes well over a year,” he said. “The quality runs deep here and it’s a tribute to the kids and their families.”