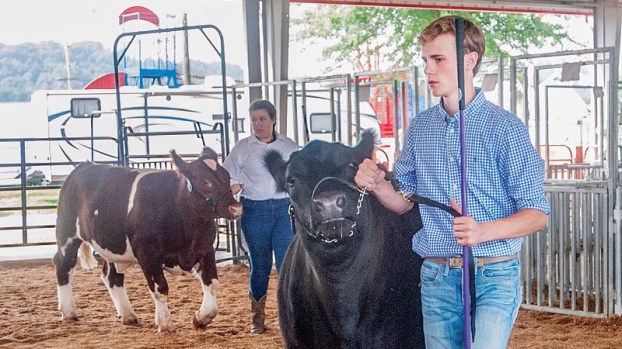 Dylan Back received the Showman of Showmen award Friday morning at the 2017 Lawrence County Fair.

ROME TOWNSHIP — Showmanship grand champions from all categories at the Lawrence County Fair came together Friday for one last competition.

The Showman of Showmen contest took place in the main barn of the fair, bringing with it a variety of animal species.

Those competing had already won the top prize in their individual competitions throughout the week by showing their animal of choice.

Now, they had to show their ability to present a variety of animals.

“If they’re a rabbit person, now they might show a goat,” Lecia Menshouse, of the 4-H committee, said.

First came the seniors, who led the animals around the ring and presented them, then spoke with judge Kayla Nicholson about each.

There was some minor chaos with runaway lambs, who kept getting away from entrants, but were quickly caught each time by fellow competitor Justin Black when they ran by him.

Nicholson asked each of the senior participants to introduce themselves and explain why they specialize in their animals.

Connor Franklin, who won earlier for chickens, said it is because his family raises them for eggs, while Maggie Ashworth said she chose rabbits because they are the easiest to accommodate at her home.

After the scores were tallied, Dylan Back, 17 of Symmes Valley, who is involved with FFA at his school, was named senior showman of showmen.

He was happy with the win, but it was not his first time taking the top honor.

“This is my fifth year bringing goats,” he said. “And I’ve won showman four out of five times.”

Following the seniors, the younger entrants took part in the junior competition. While they did not have to handle the animals, they still had to show their knowledge of each species, rotating between judges who had an animal set up at each station.

Winners were named for each animal, and taking several and, ultimately, the Junior Showman title was Tessa Shelton, 12, of Kitts Hill.

An Ironton Middle School student, this is her fourth year taking part in the fair, where she presents both chickens and rabbits.

She said she was not expecting to win.

“I was really surprised,” she said.

Nicholson, an Ohio State University graduate, praised the work of the 4-Hers in the ring.

“You guys took the time to figure out and present animals you didn’t know,” she said.