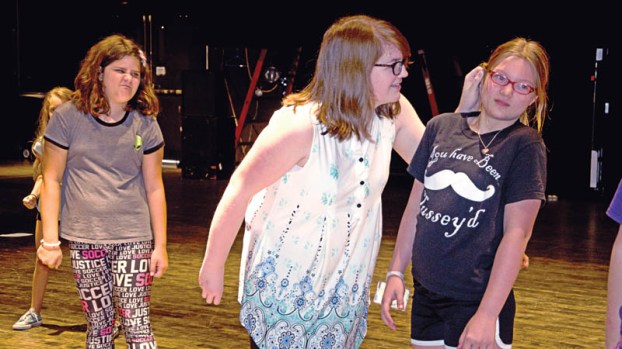 Students at the summer arts camp classes at the Paramount Arts Center rehearse for a performance of “Annie Jr.” as part of a two-week production course.

ASHLAND — Students at the Paramount Arts Center summer camps have been hard at work this week, learning all aspects of stagecraft, in preparation for a public performance.

A two-week production camp is one of the classes offered in the final summer sessions of courses at the theater, located on Winchester Avenue in Ashland.

It offers enrollees a chance to see the process of putting together a live show, from auditions, to casting, to rehearsals.

“Kids come in at 8:30 a.m. every day, and they’re here until 4 p.m.” Emily Pritchard, camp manager, said. “They work all day on things like characters, team building, blocking and props.”

She said the students will see their work pay off in a performance of “Annie Jr.” on Friday at 7 p.m. The show is free and open to the public.

Pritchard said the course is one of the most popular offered at the Paramount.

“It’s one of the most exciting opportunities, because they get a chance to perform on the main stage.”

Austin Muncy, the stage manger of the production, said things are coming along, and that they have blocked the entire show.

“We’ve run through most scenes and learned all the songs,” he said.

He said the songs will be sung live to a backing instrumental track.

Also offered at the Paramount this week was a modeling class, taught by Wyatt Wheeler, of Lawrence County, Kentucky, who has worked as a model in Cincinnati.

He said the group of 17 students, ages 7-13, were learning the basics of the industry, such as runway walking, how to find an agent, and tips on doing hair and make-up by their selves.

“They learn what it takes to get into the industry,” he said.

He said they are also advised on how to watch for fake agents or scams, how to take advantage of social media and, most importantly, the value of confidence.

“They sign a Confidence Contract,” Wheeler said. “It says, ‘Be Yourself and be honest with yourself.”

Another popular offering at the camps was the cooking class, taught by Eugenia Wilson.

“It’s a hands-on class,” she said. Everything they make themselves.”

The students were working on pizza crusts, created from flour and yogurt.

Wilson said, each day, they work on a different project.

“Tomorrow, they’re doing stir fry,” she said. “And they’ll be doing taco filling, pancakes and we’ll be making ice cream in a bag.”

She said, in addition to food preparation, they’ll also be learning about nutrition and taking part in physical activities. And they’ll be creating one non-food item.

“We’ll be teaching them how to make slime,” she said. “Every kid loves slime.”

For those who missed the chance to enroll in summer camps, the Paramount will be offering a wide variety of classes in its Fall Academy, which opens Aug. 21, Pritchard said. For more information, visit www.paramountartscenter.com or call 606-324-3175.

Lawrence County Fair comes to end with the sale of animals ROME TOWNSHIP— Saturday was the final day of the... read more