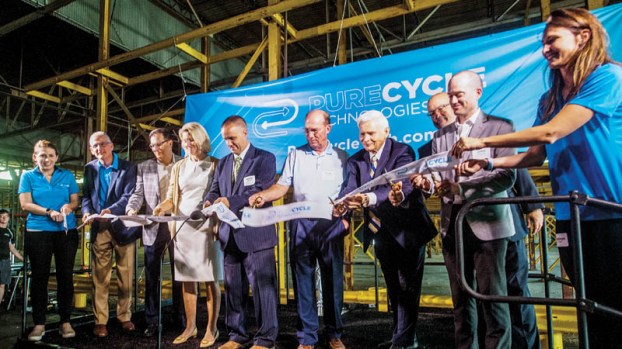 Company representatives with PureCycle Technologies, along with government and local officials, announce a new recycling facility in Haverhill during a ribbon-cutting ceremony Thursday.

Facility plans to create 60 jobs paying around $19 per hour

Local officials, as well as representatives from the Southern Ohio Port Authority, Lawrence Economic Development Corporation, PureCycle parent company Innventure, Procter and Gamble and the offices of state and federal elected officials, gathered in Haverhill today at the former Dow Chemical site to celebrate the future of PureCycle in our communities.

Innventure CEO Mike Otworth, whose company is working with Procter and Gamble to capitalize on new recycling technology developed by Procter and Gamble’s Dr. John Layman, thanked a number of people during the opening of the event, including Andy Glockner and the Glockner family for their financial support of the project, SOPA for their work on the bond and the LEDC for their work in providing the site.

“We have roots here,” Otworth said, noting that his parents and grandparents were from Portsmouth, and that he spent a great deal of his youth in the area. Otworth explained that he even spent a short stint on the SOPA board before moving on to other projects.

But, despite building a career outside the region, he explained, he has memories of a time when southern Ohio was a vibrant economic center. He said that he was proud to be a part of the resurgence of industry coming back to the area with a focus on new and emerging technologies.

Dr. Bill Dingus, executive director of the LEDC, said it was a good time to be partnering with folks like SOPA executive director, Jason Kester, and that it was exciting to be seeing progress in this area that had been identified as an industrial corridor with potential for growth for a long time. He said that the stretch along U.S. 52 from Wheelersburg to Hanging Rock, which he called the Southern Ohio Industrial District, had been identified as an area to target for development for nearly 30 years, but that the communities were finally seeing the fruits of the long, hard work that has gone on behind the scenes for decades.

He thanked PureCycle and Procter and Gamble for their good faith in working with the LEDC and SOPA.

“The beauty is getting a partner that is willing to trust us,” Dingus said.

Dingus also praised JobsOhio, who is expected to provide assistance with new skins and insulation on the buildings, and said that they “anticipate AEP being a strong partner as well.”

Those jobs are for the production plant, Innventure CMO Lindsay Lingle explained. They don’t include future growth or jobs in the feedstock evaluation unit. The production plant, she said, is expected to be fully operational in late 2020. The future feedstock evaluation unit will determine the quality of the materials being recycled and “what the end product will be.”

Kester added that the project will also employ approximately 40 construction workers, beginning as soon as this year, as they begin getting the site ready for the delivery and setup of components by the third quarter of 2018.

“We’re excited that our region has been chosen for this innovative technology,” Kester said. “Not only will the new facility create up to 60 jobs with average annual earnings of $40,000, but it will allow us to play a role in turning a waste product into something that many different industries can reuse. We think it will encourage other innovative companies to bring jobs to our region.”

PureCycle will recycle industrial polypropylene scraps in a process licensed from The Procter & Gamble Company. The facility will convert dirty feedstock into virgin-like polypropylene, without any color or contaminants, for use in a variety of products.

But, for Otworth, bringing jobs and development back to the area is nearly as exciting as the new technology.

“I spent a lot of time down here in southern Ohio,” Otworth told The Tribune, “and, like I said earlier, I remember when the economics here were much better, and I’d really love to see it return to the way it used to be. That was part of our motivation for wanting to locate here.”

Through the camera’s lens