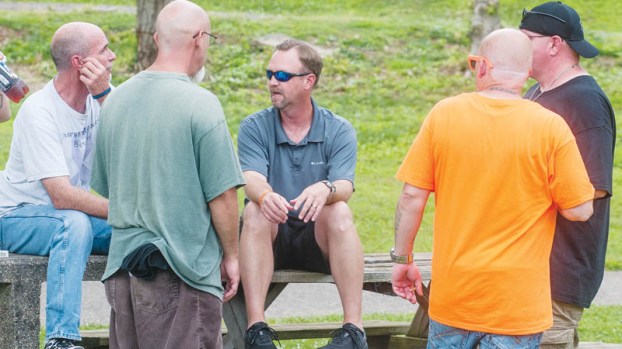 Judge Andrew Ballard talks with visitors at the Picnic in the Park event Friday in Chesapeake. Picnic in the Park, sponsored by Riverside Recovery, celebrates and brings together people who have battled drug addiction.

CHESAPEAKE — Dozens came out to Chesapeake’s community park on Friday to continue a conversation on the addiction epidemic facing the region.

A Picnic in the Park, organized by Riverside Recovery Services, took place at the shelter, featuring speakers on the issue, as well as food and inflatables and activities for children.

Riverside organizers said Lawrence County Prosecutor Brigham Anderson and Common Pleas Judge Andrew Ballard have been putting together community events throughout the year, to put the focus on the opioid and heroin addiction issue in the region and to foster discussion on recovery and solutions.

Riverside had originally planned the Chesapeake event for June, but had to reschedule due to storms.

While temperatures were high and the weather was muggy on Friday, it did not deter a sizable crowd from coming out.

The group, an outpatient drug and alcohol counseling program, is based in South Point and operates a men’s sober living home and offices in Chesapeake, with plans for a women’s home in Proctorville.

Riverside has faced some opposition in Chesapeake from some village leaders, who objected to the men’s home being located in a residential neighborhood, leading to contentious discussions at village council meetings.

Amy Smart, the director of Riverside, said the village event was patterned after earlier events in the county.

“We wanted to bring something to Chesapeake for the entire community,” she said. “It’s been awesome.”

Kathy Ross, the group’s intake coordinator, said the goal was to “bring awareness and education around the subject.”

“It’s amazing to watch support as people come, and to see people come out to support family members,” she said.

Speakers at the event included Ballard, as well as a representative from the office of U.S. Sen. Rob Portman, R-Ohio.

Lawrence County Judge Municipal Court Donald Capper said he was invited to the event by Ballard.

“It’s important to help people who are in recovery and to give as much reinforcement as possible and to help agencies working on the issue,” he said.

“The public needs to know what’s going on to try and fix things,” he said.

Dwayne Woods runs the Heroin Hearse of Huntington, which sets up displays on the dangers of addiction.

The hearse was parked at the edge of the park, accompanied by signs with slogans such as “Heroin = death,” along with a casket on display.

Woods said he would give the crowd a close-up view of the vehicle and let them hear “just what the sound of (the lid closing on the casket) is like” to illustrate the finality of a fatal overdose.

Woods said the stigma needs to be removed from addiction and he told those who have family members dealing with addiction not to give up and that recovery is possible.

“There are many who can say they have been put on a better road,” he said. “And if you’re still using, there’s help out there, if you want it.”

Accompanying Woods was a man, who asked not to be identified, who is going through a recovery program and has been sober for a lengthy time.

He said his addiction, at its height, was so severe that he had “robbed my dad blind.”

Woods also brought a second vehicle, which contrasted with the hearse.

Named “H2,” it offers stories of hope and the body of the car was signed by those in recovery programs.

Riverside’s staff have offered their own stories as examples of success through recovery programs.

Both Smart and Ross have been through recovery, and Smart has been open about the five years she served in prison as a result of her addiction.

Following her release, she founded the group, which launched in 2011.

Ross said the late Lawrence Common Pleas Judge Scott Bowling was able to help her turn her life around.

“He afforded me an opportunity to change my life and I am a better person,” she said.

Woods said those who seek recovery will find that they become a better person than before they started using drugs.

Capper said Riverside maintains a regular presence in his courtroom and he has referred offenders to the group.

“Some are court-ordered, and some go on their own,” he said, noting he has had some who refuse and some who have already been through a program before they see him.

He said there is no “one size fits all” solution for addiction, but the important thing is that the person is motivated to seek treatment.

Attending the event was Chesapeake’s interim police chief, Randy Lewis, who arrived on crutches, due to an ankle injury.

He said he was there at the request of Woods, who recently set up the Heroin Hearse near Chesapeake’s village hall for a roadside display, assisted by volunteers and village police.

“I’m here to show support for the people who are helping people and those in recovery,” he said.

Lewis earned words of praise from Woods, who spoke about a major drug arrest in March by the village’s police department.

“I want to give him the thanks for taking one of the biggest drug dealers off the streets in Chesapeake,” Woods said. “How many friends’ lives and many neighbors’ lives were saved by that?”

Summer reading coming to an end