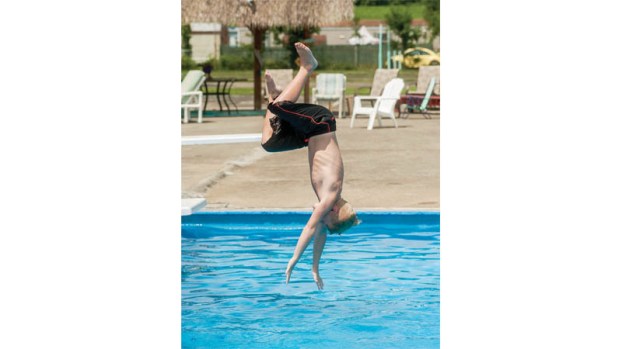 Eight-year-old Tyson Harvey is head over feet as he dives off the high board at Sta-Tan Pool Monday afternoon.

Summer is winding down, with the start of the school year just weeks away, and people are getting in their last days of fun in the sun.

Sta-Tan Pool in Ironton had a decent crowd on Tuesday, ranging all ages, with children enjoying the high dives, toddlers playing in the kiddie pool and adults soaking up the sun.

“It’s been fairly busy,” Kathy Cunningham, the pool’s owner, said of the season. “Though some days it’s been rainy and some days, maybe too hot — where the only thing people want to do is get in the water.”

Day passes are also available for those 12 and older, in packs of 10 and 20, and a senior citizens discount is offered, she said.

Cunningham said the pool has an event planned for Aug. 8, which will be open to non-members. A back-to-school night swim will take place from 8-10 p.m.