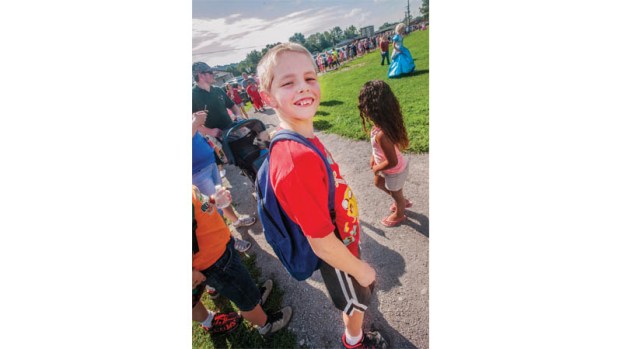 SOUTH POINT — The start of school is just around the corner, and, as it has for the past several years, an annual backpack giveaway drew hundreds to South Point’s park on Tuesday.

A line stretched down the street shortly after the event, organized by South Point Community Churches, began.

Families waited for their turn to go to the back of several parked trucks, where the children could chose from the packs donated by the group.

Along the way, volunteers were dressed in costumes, ranging from superheroes like Spider-Man, The Hulk and Captain America from Marvel Comics, Batman from DC Comics or Maleficent and a number of princesses from Walt Disney films.

In addition to backpacks and school supplies, church volunteers were offering back-to-school haircuts for children and food, including hot dogs, chips and cookies was offered.

Terry Wagner, the pastor for Tri-State Worship Center, said this is the fourth year for the event.

“We have 700 backpacks,” he said, adding that there was no registration requirement for attendees. “All they need to do is show up.”

He said if a child was unable to attend, parents could pick up a pack after the children present had been served.

“We know it’s baseball and football season, so if a child can’t come, then all they need is for a parent to be present,” he said.

Land bank targeting structures for teardown SOUTH POINT — A set of structures that has been deemed blight by many... read more