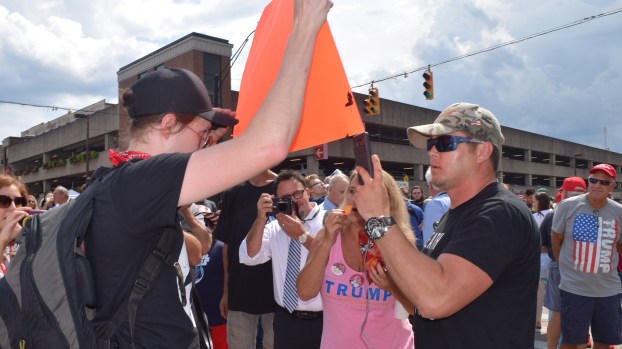 The Tribune/Heath Harrison Leif Olson, a student activist from Marshall University protesting the visit of President Donald Trump, left, engages in a confrontation with an unidentified Trump supporter prior to the rally at the Big Sandy Superstore Arena on Thursday. 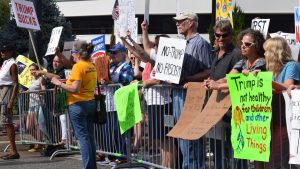 The Tribune/Heath Harrison
Protestors line up along Eighth Street in Huntington on Thursday to voice their disapproval of the rally by President Donald Trump at the Big Sandy Superstore Arena.

HUNTINGTON — President Donald Trump filled the Big Sandy Superstore Arena with supporters Thursday, but those who opposed his agenda and visit to West Virginia made their voices heard on Friday.

A coalition of activist groups, coordinated under the banner of Tri-State Indivisible, gathered in protest across the street from the venue, lining the opposite side of Eighth Street.

“Tri-State Indivisible protests this president’s nearly constant attacks on our democracy in both his violent language and policies that widen the gap between the haves and the have-nots,” Jeanette Rowsey, coordinator for the organization, said in the group’s announcement of the demonstration.

Several dozen stood at the barrier by the arena in the hours leading up to the visit, with the crowd growing as the evening progressed. In the hour prior to Trump’s arrival at the arena, organizers estimated the demonstration numbered about 400 people at its peak.

Alex Moore, of Huntington, wearing a shirt that read “Girls just wanna have fundamental rights” said she came to the demonstration on her own and was not part of an organized group.

“I’m here, because I don’t respect Donald Trump as a person,” she said. “He’s really ill-prepared to be president.”

She said, while she does not necessarily disagree with Trump on every issue, she felt his positions “do not come from a good place of the heart.”

“I don’t think we should have someone so disrespectful leading our country, while we’re trying to progress forward,” she said.

Up the street near Pullman Square, a smaller group had set up, leading chants of “Love Trumps Hate.”

“When people of color and immigrants are under attack, what do we do?” the chant leader asked.

“”Stand and fight back,” the group replied.

Charlene Vaughn, of Charleston, said she was there as part of Rise Up West Virginia.

“I came out today to say that I’m not happy with this man,” she said. “I’m embarrassed by him. I’m ashamed of him.”

She cited the investigation of special prosecutor Robert Mueller into alleged ties between the Trump campaign and the Russian government.

“I believe he’s a traitor,” she said. “I think he was in on the Russian collusion and messing with the election.”

She said she feared Trump would fire Mueller, as was the case with FBI director James Comey earlier this year.

At one point, the muggy, hot day gave way to a downpour and members of the two sides were temporarily brought together.

While most Trump supporters kept their spot in line and demonstrators remained at the barrier, a good portion of each crowd ran for cover under the balcony of the nearby Holiday Inn and Suites, where both waited out the rain, remaining civil to each other under the shelter.

One group from the protest seeking refuge from the rain was comprised of South Point High students Austin Johnson, J.R. Marcum, Adrien Johnson and Monik Brooke.

“We’re here to stand up for American rights,” Austin said. “This administration has tormented and terrorized our country.”

He cited a number of issued he disagreed with Trump on, including his call for a ban on transgendered members of the military, attempts to repeal of the Affordable Care Act and a proposed border wall between Mexico and the United States.

“And I don’t like how he demonizes women in his vicious tweets,” he said of the president’s use of social media.

Nicole Johnson, a Marshall University social work student, said she was there to oppose any effort by Trump to cut Medicaid.

“Medicaid is important for people with disabilities,” she said. “Without it, there’s nothing for them.”

One of the early arrivals to the event was Marshall University student Leif Olson, who stood across the street from the Trump supporters with a megaphone playing various protest songs, such as Peter, Paul and Mary’s “If I Had a Hammer” and Lady Gaga’s “Born This Way.”

Olson was approached by police early on, but, when he showed that he had applied for and received a permit to use the audio system, they allowed him to continue.

At one point, one of the Trump supporters, wearing a T-shirt reading “Death to Liberals,” walked up to Olson, and began filming him with his phone.

The two exchanged angry words before police approached and separated them, sending each back to his respective side of the street.

A number of police and SWAT members remained stationed in the street, to keep peace between the two sides.

In preparation for the president’s visit, city officials, working with the Secret Service, closed off portions of Eighth Street, Third Avenue and Veterans Memorial Boulevard.

Along those streets, a number of vendors had set up tents and carts, selling T-shirts, buttons, signs and other memorabilia.

These ranged from simple “Trump/Pence” and pro-Republican shirts, to the famous “Make America Great Again” hats, to some with anti-Hillary Clinton messages, such as “Hillary for prison.”

A handful had Confederate flag memorabilia and shirts with more explicit and inflammatory messages, while one vendor was selling posters of targets, featuring the faces of Hillary Clinton and North Korea dictator Kim Jong Un printed on them.

Not all of the vendors were interested in pushing political wares, however.

Christopher Gist, of Kenova, 18, was selling rubber band bracelets in a number of varieties and was making use of the large gathering.

“I knew there would be a lot of people here,” he said, as he set up on vendor’s row.

Meanwhile, one street over, one local business decided to take advantage of the president’s visit in its drink offerings.

Rio Grande Mexican Restaurant had a sandwich board set up outside advertising a “Trump special” of “White Russians for $1.99.”

Tensions among supporters and demonstrators had been somewhat raised before the president’s visit, with national outlets reporting on a Trump supporter who had posted on a local TV station’s Facebook page, calling on his side to come to the rally armed to take on protesters.

On Wednesday morning, the arena was defaced, with an obscene graffiti aimed at Trump painted on it. Crews had worked to clear the vandalism before the event.

Capt. Hank Dial, of the Huntington Police Department, who was overseeing security, said despite the atmosphere leading into the event, “things are going smooth.”

As of 4 p.m., he said there had been no arrests or incidents.

“We’ve got a crowd of protesters here to speak and we have people going to see the president,” he said. “It’s hot and crowded, but there are no issues.”

A handful of protesters, some unfurling a rainbow flag for LGBT issues, were removed during the rally.

Trump had previously appeared in Charleston, during the 2016 campaign and spoke at the Boy Scout Jamboree in Glen Jean, West Virgnia last week. This was his first visit to Huntington.