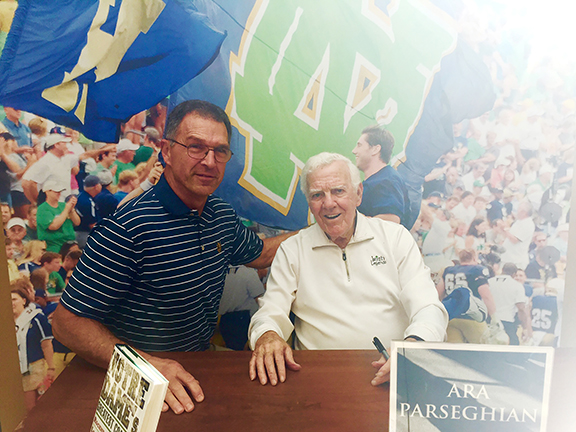 FLORENCE, Ky. — If you want to call Mike Holtzapfel a dreamer, that’s fine with him.
Holtzapfel not only realized his dream to play for the Notre Dame Fighting Irish, he got a bonus dream with a national championship.
Holtzapfel played for the St. Joseph Flyers where he helped the team post back-to-back unbeaten football seasons in 1963 and 1964 under coach Pat Sheridan.
The 1965 graduate signed with Notre Dame but was not allowed to play on the varsity team since the NCAA had a rule against freshmen playing at that time.
Holtzapfel said there were a number of schools who talked with him, but he said the main three were Miami, Ohio, Indiana and Notre Dame.
“John Pont was at Indiana and Bo Schembechler was still at Miami, Ohio. I told them if Notre Dame comes up with an offer, I’m going there. They understood that,” said Holtzapfel.
In what were just some unusual circumstances, all through the recruiting process Holtzapfel never met head coach Ara Parseghian.
“(Notre Dame assistant coach) Paul Schultz recruited our region. He was the one who came to Ironton and talked to me when I was out there. I didn’t talk to Ara until I got out there in the fall as a freshman. He was out of town when I was there for a visit. It didn’t take much recruiting to get me there,” Holtzapfel said with a chuckle.
One thing Holtzapfel said that helped him get noticed by college scouts was the unbeaten teams he played with at St. Joseph and he gave a lot of credit to his teammates.
“It was a heck of a bunch of guys to play with. I’m glad they got some recognition (at their 2007 reunion). If it wasn’t for them, I wouldn’t have gotten (to Notre Dame),” he said.
A running back in high school, Holtzapfel found himself a lineman at Notre Dame. Freshmen were ineligible to play at that time but he did get to see some action in a few games during his sophomore year when the Fighting Irish won the national championship.
“That was an awfully good football team. I can say I played on a national championship team,” said Holtzapfel.
Holtzapfel got to play more as a junior and then he was moved to tight end his senior season. He was also the team’s long-snapper that year and earned a varsity letter.
“My senior year they moved me to tight end and I did all the long-snapping. I was playing in games as a center until then. I felt comfortable (at tight end). It was a better,” said Holtzapfel.

After a win at Southern Cal in the final game of his senior season, Parseghian asked Holtzapfel if he could work it out with the school to give him a fifth year, would he be willing to return.
“That tickled me to death. I had a few injuries my sophomore and junior years but they didn’t keep me from doing that much. (Parseghian) he tried to use that to bring me back but it didn’t work out. I would have liked to come back,” said Holtzapfel.
“I feel fortunate how things went. Just to go out there was a dream to do it. I went out there as a kid and to get to do it at a player was a dream come true.”
Holtzapfel still goes to two or three Notre Dame games each season. He has a trip planned for the Southern Cal game that includes former teammates J.C. Medinger and Pete Kratzenberg and their wives.
“J.C. goes out a lot. Pete has never been,” said Holtzapfel.
Although he loves the games and the atmosphere, Holtzapfel said staying home isn’t a bad option.
“I love college football but it’s hard to beat sitting in the basement because the concession stand and bathroom are a lot closer and the seats are better. But I like to go back and catch up with (teammates) a little bit,” he said.
As a member of the 1966 national championship team, Holtzapfel was on the sidelines for what was billed as the “Game of the Century” when No. 1-ranked Notre Dame visited No. 2-ranked Michigan State.
The game ended in a 10-10 tie and there was some criticism of Parseghian running out the clock on the final play and not trying to go for the win. Holtzapfel said there were a lot of circumstances involved and it wasn’t the bad decision that it became in the media over the years.
The Fighting Irish began the game without All-American running back Nick Eddy who slipped on some ice getting of the train and dislocated his shoulder.
Starting quarterback Terry Hanratty was hit by future NFL Hall of Famer Bubba Smith and suffered a shoulder injury on the second series of the game. Starting center and future NFL player George Goeddeke suffered an ankle injury on the final play of the first quarter and sat out the rest of the game.
Backup quarterback Coley O’Brien was still showing the effects of being diagnosed with diabetes earlier in the season. He had already taken two insulin shots earlier in the game.
“With Goeddeke out we moved our second team center to guard and inserted Tim Monty center,” said Holtzapfel.
“He was 5-10, 205. In the second half they moved Smith who was 6-8, 285, and put him over center. On the first play of the second half we came out of the huddle and Smith was on one knee and Tim said ‘I’m looking him eye-to-eye.’ Tim did a great job. He didn’t blow Smith off the ball but he neutralized him.”
Michigan State had the ball fourth-and-4 at its own 36 and elected to punt. Notre Dame got the ball back at its own 30-yard line with the wind in its face and 1:24 to play. O’Brien ran for 4 yards, ROcky Bleier gained 3 yards and Larry Conjar rushed for 2.
The Irish did go for it on a fourth-and-one at their own 39 and made the first down on an O’Brien sneak.
But O’Brien was sacked for a  7-yard loss by Smith and Parseghian decided not to do something to hurt the team and O’Brien took ran 5 yards on a quarterback sneak on the final play and the game ended 10-10.
“O’Brien was diagnosed with diabetes earlier in the season. He was weak and had a hard time even throwing the ball 20 yards. Everyone wanted an outcome and there wasn’t an outcome,” said Holtzapfel.
The Irish did have a chance to take the lead but Joe Azzaro’s 41-yard field goal attempt missed by inches to the right in the fourth quarter.
It was the Spartans final game of the season but Notre Dame still had a game at No. 10-ranked Southern Cal the following week.
“We had 19 of 22 starters playing the NFL for at least two years. Nick Eddy and George Goeddeke didn’t even play. Michigan State had four of top eight draft picks. They didn’t have as many drafted as us but they had a lot of talent,” said Holtzapfel noting that the Irish outscored opponents 362-38.
“When we had all our people and they had all their people we had a better team,” said Holtzapfel. “But it was a great football game.”
Notre Dame crushed Southern Cal 51-0 the following week and clinched the national championship and Holtzapfel had a ring.
Now that’s the kind of dream world to live in.

Russell viaduct remains closed for repairs this weekend, next week