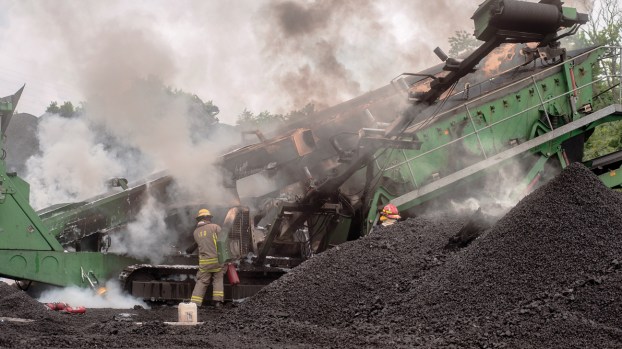 The Ironton Fire Department was called out to put out a blaze at the Mid-Continent Coal and Coke plant in the 3400 block of South Third Street on Friday afternoon.

IFD Captain Joe Stevens said that fire started in a screening conveyor belt in the coal and coke storage area.

“We don’t know what caused it, but it was a machine called a screening plant,” he said. It is a conveyor belt that takes coal or coke from storage to the back of truck. “It’s a huge machine.”

Stevens said the screening plant was in operation and workers saw a little bit of smoke coming from the machine’s engine before they saw flames. They tried to put it out with two or three fire extinguishers.

“But the fire extinguishers they had, it wasn’t enough,”  Stevens said. “So it grew. It was a total loss.”

The Ironton Fire Department sent both engine trucks and the ladder truck to the scene to put the fire out. Lawrence County EMS stood by in case of medical emergency.