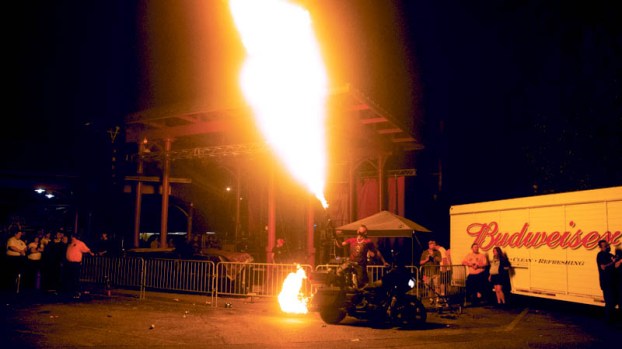 Torch’s Rock & Roll Inferno lights up the night with a flamethrower at the 2016 Rally on the River. Torch returns on Friday. The rally will have performances by local and tribute musical acts throughout the weekend.

Rally on the River kicks off Thursday in downtown Ironton

Rally on the River returns to Ironton this week and entertainment and events are scheduled for Thursday through Saturday.

Music this year leans heavily toward tributes to the major names of hard rock.

On opening night Thursday, Halen, a tribute band to the rock band Van Halen, will perform at 10 p.m.

Friday will feature Meccadeth, which bills itself as “the ultimate Megadeth tribute,” taking the stage at 8 p.m.

At 10 p.m. on Friday will be the first of two performances by Torch’s Rock & Roll Inferno, featuring the biker and fire performer, followed by the southern Ohio hard rock band Facing Fire at 10:30 p.m.

On Saturday, Derailed will perform at 6:15 p.m. The Four Horsemen, a tribute band of Metallica will play at 8 p.m., followed by Torch’s performance at 10 p.m., with the night closed out by AC/DC tribute band Thunderstruck at 10:30 p.m.

In addition to the musical acts, other activities are planned for the event.

A Poker Run, hosted by Bikers for Christ, will leave from the parking lot of 1305 South 3rd Street at noon on Saturday, Aug. 19. Registration is $10, $15 with a passenger and sign-ups start at 6 p.m. Thursday at the Welcome Center on the rally grounds.

On Saturday, “Rumble at the Rally” is set for 5 p.m. at the Ron-Na Theater, featuring women from WWE, ROH, and indy talents across the country. General Admission tickets are $15 and a limited VIP passes, which include front row seating, a VIP event lanyard, and autographed event poster, are $45.

Closing out the rally will be a “Full Throttle Church Service,” set for 10:30 a.m. Sunday at the Ironton First Church Of The Nazarene at 2318 S. 4th Street. Lunch will be provided and Roy Bennett will be the speaker.

Rally on the River is organized by the Friends of Ironton and admission this year is free. Camping is available for the event at www.rallyontheriver.net.