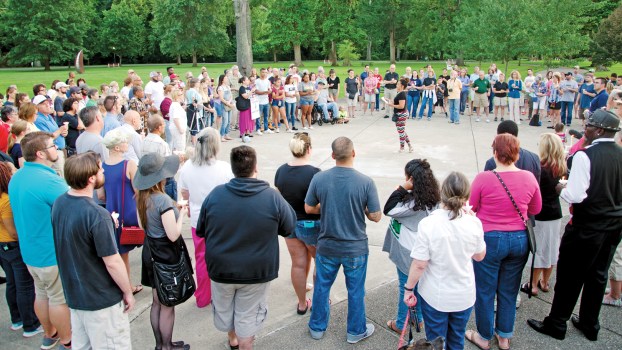 The Tribune/Heath Harrison A candlelight ceremony tool place at Ritter Park in Huntington on Sunday to honor those who died in Charlottesville on Saturday. 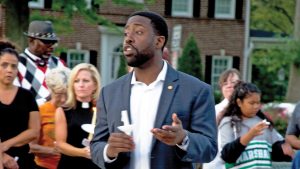 The Tribune/Heath Harrison
Sean Hornbuckle, who represents Cabell County and Huntington as a delegate in the West Virginia Legislature, speaks at a candlelight ceremony at Ritter Park in Huntington on Sunday.

HUNTINGTON — People from across the Tri-State gathered on Sunday by the fountain in Ritter Park to reflect on the tragic events of Charlottesville, Virginia.

A candlelight ceremony took place at sunset to focus on healing racial divisions and to honor those who died during the white supremacist rally over the weekend.

The event began with a remembrance of Heather Heyer, a 32-year-old paralegal who was killed protesting the rally. Heyer was among those, including 19 injured, who were hit when a white supremacist plowed his car into a crowd of protesters.

Barbara Garnett pointed out that Heyer’s last post on social media read, “If you’re not outraged, you’re not paying attention.”

“I’d like for all of us to pay attention,” she said. “There are people out there who want to hurt us. This is not American.”

The group also honored two Virginia state troopers, Lt. H. Jay Cullen, 48, and Berke M.M. Bates, 40, who were killed on duty in a helicopter crash while handling public safety during the event.

The Huntington ceremony drew a few hundred and was one of many across the country on Sunday following the events of Charlottesville.

Standing nearby was a group of six officers from the Huntington Police Department, serving as security, given the tensions of what happened in Virginia.

Another of the speakers was the Rev. Jacque Parlotta, of Central Christian Church in Huntington.

“We pray for the loss of life and about the dishonor of children of God,” she said. “The wounds and word of history continue to be re-opened.”

“No one is born hating another person because of the color of his skin or his background or his religion,” the quote read. “People must learn to hate, and if they can learn to hate, they can be taught to love.”

Hornbuckle said teaching love is “something we need to start.”

“This is something that is not debatable,” he said. “There aren’t many sides. There is one side. This is a domestic terror attack by white supremacists and neo-Nazis. Don’t sugarcoat it. This is not a Democratic thing or a Republican thing. It’s a no-brainer thing.”

Hornbuckle said he was optimistic people could overcome the decisions and start a dialogue.

“We need to all work together,” he said. “And the good news is, that I believe in this community. Let’s come together, all of us.”