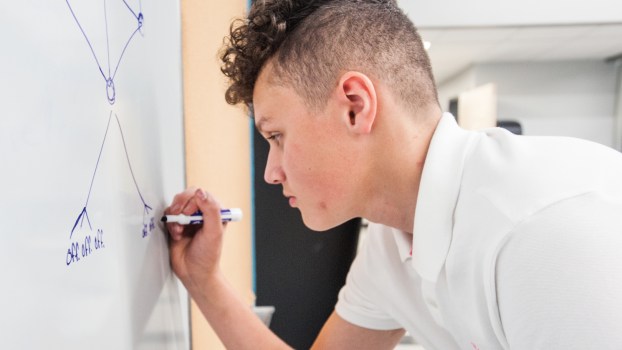 The Tribune/Jessica St. James Jaeden Perkins, of South Point, works on a visual graphic to determine which type of government would be best during the first day of school at the Tri-State STEM+M school Monday. 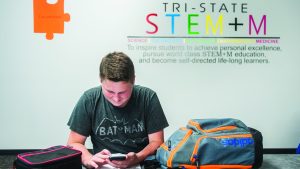 Jacob Cremeans, of Chesapeake, during the first day of classes at the new STEM+M school.

“It went great,” Spears said in a meeting of the instructors at the end of the school day. She said the first week at the school will be “immersion week,” in which students are introduced to the basics of STEM education. “They see that the structure is different from any other school.”

Hunt said she was struggling as to describe how well the first day went.

“I want to find a word, other than ‘great,’” she said. “It was better than expected and the kids were happy.”

Spears, who is nationally board-certified in physics, said that when the students were asked what their favorite aspect of the first day was, they told her the entire day.

Three of the school’s students, ninth graders Haley Wiseman, Emily Baldwin and Bella Schraeder, shared their thoughts on the experience.

“We did a scavenger hunt, and then we got to make up our own rules,” Baldwin, who comes to the academy from South Point Middle School, said.

“We made an outline of student government,” Schrader, a former Fairland student who is interested in architecture, said.

The students are already thinking about their career paths.

“I want to be an engineer,” Baldwin said. She said she learned of the school through an informational booth at a fair in Proctorville.

Wiseman is planning to go to medical school.

“I found out about it through Facebook,” she said of the school.

Shah, a veteran educator who has served as both principal and assistant principal of South Point  High School and taught science for 20 years at Fairland High School, said the students are working toward an event on Friday, in which they will present before parents and share what they have learned in their first week of classes.

The school’s current facility is a temporary one, with a permanent location set for the Point Occupational, Wellness and Training Center, which is planned for construction.

Shah worked to launch the school with the late Scott Howard, who served as the school’s CEO before his death in November.

At one of the informational meeting leading up to the launch, Howard said the goal was to create a network of STEM academies throughout the Tri-State.

As a public school, the school is open and free to any Lawrence County student, while those from West Virginia and Kentucky must pay tuition.

In addition to the academy, STEM education is available at a number of Lawrence County high schools through Collins Career Technical Center’s Project Lead the Way program. The latest addition, Symmes Valley High School, will host its first classes this week.

New school has much to offer