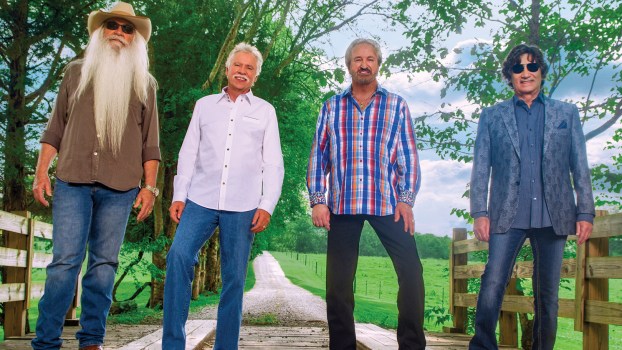 Photo courtesy of the Oak Ridge Boys Country and Gospel quartet The Oak Ridge Boys are set to perform at the Catlettsburg Labor Day Festival on Sept. 4. Prior to joining the group in 197, bassist Richard Sterban, right, sang with J.D. Sumner and the Stamps Quartet as back-up for Elvis Presley in the early 1970s. 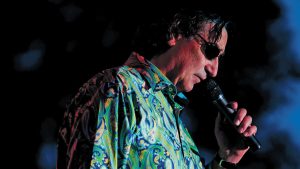 Jessica St. James/The Tribune
Richard Sterban, bass singer for the Oak Ridge Boys, perform with the group at the 2016 Lawrence County Fair as part of the county’s bicentennial celebration.

Quartet to perform in Catlettsburg on Sept. 4

It’s been 45 years since Richard Sterban joined the Oak Ridge Boys as their bass singer, and he says the key to keeping a group like his working for so long is to make sure they still enjoy performing.

“One of the secrets is that we have fun doing what we do,” he said of the quartet, which also includes Duane Allen, Joe Bonsall and William Lee Golden, and other than a stretch in the late 1980s, has kept the same line-up since he joined.

The band, known for its hits like “Bobbie Sue” and “American Made,” still tours relentlessly and he says they pride themselves in the fact that rarely play the same show twice.

“We always change it up,” he said, noting the range of recordings from country to gospel to patriotic fare for which the group is known. “We have a wealth of material that we can pull from. Joe makes up the setlists. He has a real sense of what people want to hear. He senses the pulse of the crowd even before we get there.”

Though he said certain songs, like “Elvira, with his famous solo of “oom-pa-pa-oom-pa-pa-mow-mow,” are guaranteed to be included.

The Oaks are scheduled to play at Catlettsburg’s Labor Day Festival at 7 p.m. on Sept. 4. The show is free and open to the public.

Keeping it fresh
He said the audience at the show could also expect to hear material from the group’s new album, slated for release next year.

“Another reason for our longevity is the fact we have periodically gone into the recording studio and recorded new music that is actually relevant to the current marketplace,” he said. “And we try to throw in some of those new songs.  New music and new material puts new energy into us. And in turn that puts new energy into the show as well.”

The album “17th Avenue Revival,” will be their second with producer David Cobb and takes its name from the street of historic RCA studio in Nashville they used for the sessions.

Sterban describes the project as “a back to the basics kind of thing” and said that Cobb, the son of a preacher, wanted to record a Gospel project with the group.

“What he wanted to do with the Oak Ridge Boys was to go back and relive some of those days — growing up in church and growing up in Sunday school,” Sterban said. “And all of us grew up in the same kind of atmosphere.”

He said the group picked out old Gospel songs that they grew up on as children.

“And David Cobb really likes the black spirituals, and a couple of those were included in the project,” he said.

He said they took a stripped-down approach to the sessions.

“On a couple of the songs, we got the engineer to put one microphone in the middle of the studio,” Sterban said.  “He got his guitar and the four Oak Ridge Boys all gathered around just one microphone.”

Cobb, who has since recorded with Chris Stapleton and the Zac Brown Band, first worked with the group for their 2009 album “The Boys Are Back.”

Sterban said, at the time, Cobb was living in Los Angeles and was recording mostly rock acts when he approached the group for the album, which features covers of songs by John Lee Hooker and Neil Young. One song the group recorded, which garnered them a great deal of attention, was an unlikely cover of “Seven Nation Army” by garage rock duo The White Stripes.

“(Cobb) started sending us material and some of the ideas that he had for the project, and one of the first of the first things he sent us was “Seven Nation Army,” Steban said. “And when we played that song, we figured, ‘Wow. This is what this project is going to be. We are definitely going to travel down some new roads musically.’”

Working with the king
Prior to joining the Oaks, Sterban was a member of the Stamps Quartet, who, with J.D. Sumner, served as back-up singers for Elvis Presley in the early 1970s. Sterban recounts the experience of working with Presley, who died 40 years ago today, in his autobiography “From Elvis to Elvira.”

He said he still remembers his first meeting with Presley.

“We had a rehearsal scheduled in Minneapolis, Minnesota at the ball room of hotel where we staying at. We all showed up on time for the rehearsal — Elvis’ band, the TCB Band were there. So were the Sweet Inspirations.”

Sterban said they all hung out for a while, but Elvis, who he would later learn was often “fashionably late,” had not appeared. Then, they heard “this commotion coming down the hall.”

“The door to the ballroom opened, and in comes this entourage of people and in the center of was Elvis. I’ll never forget it.”

“He walked into the room and he had so much charisma and magnetism, you could actually feel him in the room,” he said. “Up to that point, I was an Elvis fan, I loved his music, but I guess would have considered myself kind of “casual Elvis fan.” When I saw him in person, I went. “Wow.’ Now I know why he’s the biggest star in the world.”

He recalled Presley’s introduction to the group.

“He came over and he knew all of us by our first names,” Sterban said. “He said ‘Welcome to the Memphis Mafia.’”

“Believe it or not, even though he was the king of rock and roll, and he certainly was, I really believe that his favorite music was Gospel music,” Sterban said.

He recalls what it was like to see Presley during a live performance of his famous rendition of “How Great Thou Art.”

“I remember doing that song on stage with him and, good Lord, you felt like, if you looked up, you were going to see Jesus coming down from the clouds,” Sterban said.

He said Presley’s love of singing these songs extended to his time off stage.

“Almost every day, he’d try to find a piano somewhere, and he’d get us together,” he said. “We would all get around the piano and we would just start singing Gospel quartet songs.”

Sterban said many of these impromptu sing-alongs would take an a cappella form, as Sterban says can be seen throughout the 1972 film “Elvis on Tour,” in which Presley leads songs on both his bus and airplane.

“If we couldn’t find a piano, he’d just start singing,” he said, remembering one time Presley approached the group as they were in place and waiting to go stage.

“He came over where we were standing and just started singing one of those black spirituals,” Sterban said. “And he expected us to join in. And, of course, when Elvis starts singing, you join in. There are certain unwritten laws, and that’s one of those.”

Sterban described his time with Presley as “a learning experience” and said he was a big influence on his career.

“He was not the biggest star in the world back then by accident,” Sterban said. “He had something very, very special.”

Choosing a path
Sterban said he details in his book the biggest decision of his life, when he got a call from Golden asking him to take the place of the Oak Ridge Boys departing back-up singer.

“Here I was, singing with Elvis, the king of rock and roll, on the biggest tour in the music business,” he said. But there was very little hesitation on my part. I was a fan of the Oak Ridge Boys, thought they had a great deal of potential and I really wanted to be part of the group.”

Though he said, at the time, he had no idea how much potential. In the years to come, the quartet would score 17 number one songs on the country charts and be inducted into the Grand Ole Opry and the Country Music Hall of Fame.

“A lot of people said, ‘How could you leave Elvis and join the Oak Ridge Boys?’ but I believed I was doing the right thing,” Sterban said. “Since then, a lot of great things have happened to me personally, as well as the rest of the Oak Ridge Boys. I think time has proven that I made a pretty good decision there.”

Blankenship appointed to STAR Board