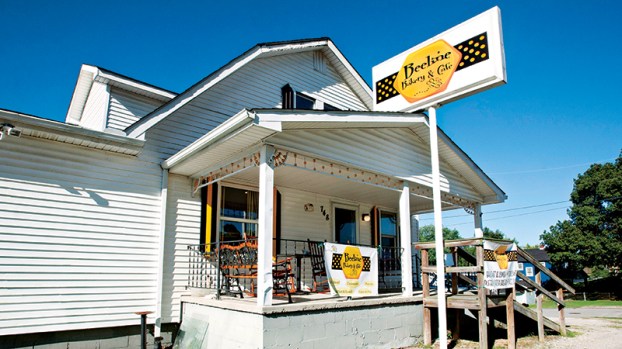 Seim, a fiddler who plays with The Sugarbeats and Joe Freeman Band, moved to the Ashland area from Seattle in 2002. She opened Beeline Bakery & Café on Bellefonte Road in Flatwoods. Photography by Jessica St. James

Shirley Seim has done a little bit of everything over the course of her career.

“I’ve been a medical transcriptionist; sold real estate; worked in customer and food service; I was a paralegal for a little while,” she said. Earlier this year, she added another line to her resume: business owner.

Seim, a fiddler who plays with The Sugarbeats and Joe Freeman Band, moved to the Ashland area from Seattle in 2002. She opened Beeline Bakery & Café on Bellefonte Road in Flatwoods in June.

“I always enjoyed feeding people, baking, cooking, that sort of stuff, and I just decided to give it a shot,” she said. “It’s had a very good response. I’m really pleased.”

Seim decided on the name “Beeline” (defined as a “straight, direct course”) while browsing through lists of American sayings.

“I made it as far as “B” in the alphabet,” she said. “I actually had another name in mind, but when I looked it up, I didn’t like the connotations. It was all just sort of random. On the bright side, it (Beeline) also had an easy color scheme.”

Tastefully decorated in yellow and black, the cozy eatery can seat about 40 people in its dining area and accommodate a steady stream of carry-out orders. Seim and her small handful of staff start the day early. They offer a full breakfast menu from 7-11 a.m. Monday through Saturday and all day on Sunday. Options range from omelets and biscuits and gravy to waffles and French toast.

“We have pretty much what you’d imagine for breakfast,” Seim said.

“They’re a standard,” Seim said. “We have them every day.” Other desserts, like custom cakes and pies, can be specially ordered. “We have a very good decorator.”

For lunch, customers can enjoy soups, salads, sandwiches (made on fresh baked hoagie rolls) or one of Beeline’s hot daily specials.

“We do different things for the daily special,” Seim said.  “It’s really whatever comes to mind. We’ve had pepperoni rolls, chicken enchiladas, lasagna… Most of it is what I cook at home and have just brought here.”

Two of the stand-out sandwiches are the smoked chicken salad and Kentucky Muffuletta (made with ham, Genoa salami, pepperoni, provolone, mozzarella cheese and olive salad). “I adapted it from the Muffuletta you usually get in New Orleans,” Seim said. “Except, we use ingredients that are available locally, such as pepperoni instead of mortadella.”

Being your own boss can be an adjustment, but it’s one that seems to suit Seim.

“It’s true what they say,” Seim said. “If you’re doing something you like, you never work a day. It can be hard, but it’s fun.”

A retired pipeline welder for Columbia Gas Transmission Corporation and farmer, Robert Newland, of Patriot, is used to working with... read more