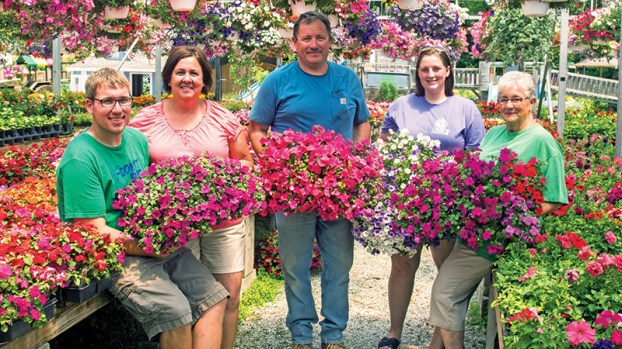 The operation is a family affair. Imel says his grandmother, Anna Stephenson, was his first salesperson. His mother, Faye joined the business after retiring and still works there. His wife, Pam, works there in the evenings and her days off from being an X-ray technician. Their son, Justin, and his wife, Katie, work there in the summers. Photography by Jessica St. James.

Imel’s Greenhouse has been an institution in Greenup County, Kentucky, for four decades.

Kenny Imel began the business on his grandmother’s property on Kentucky Route 1. He grew some produce and some flowers and over the years and kept expanding. About 25 years ago, he bought an acre of land farther down the road, and that’s when the business really bloomed.

“This is actually our 40th year. We started planning in 1976 and started building in 1977,” Imel said. The business started at his grandmother’s property, about a quarter mile from their current location. “We were there 10-15 years before this location became available.”

The operation is a family affair. Imel says his grandmother, Anna Stephenson, was his first salesperson. His mother, Faye joined the business after retiring and still works there. His wife, Pam, works there in the evenings and her days off from being an X-ray technician. Their son, Justin, and his wife, Katie, work there in the summers.

Imel’s Greenhouse began with just a single building and was mainly selling as a wholesaler with some sales to              the public.

“Now, we’re 80-90 percent retail sales,” Imel said. “What I like about retail is that we can talk directly to the customers and we can find out their needs and solve their problems.  We can help people get the right plants for their yards.”

The business has grown to include several buildings to house all the flowers, succulents, and other plants. There is a play area with massive slides, playhouses and large tricycles. There are also goats and chickens.

“We charge for the tours, but it’s more of a break-even proposition,” Imel said, adding about 2,000 kids take the tour in September and October. “And for some kids, this the only activity they get. And they all get to go home with a pumpkin.”

The most recent addition to the operation is a Grannie Annie’s Mercantile, named after his grandmother. The building is filled with old-fashioned candy, food in jars like pickled beets and eggs, honey, and seeds.

Some of the expansion was unplanned. In 2009, an ice storm took down two-thirds of their greenhouses.

“First it snowed, then the ice came. The weight of all that took down nine of our greenhouses,” Imel said. “God had a plan, though. We would have never put this type of structure back up because we didn’t think we could afford it to do it. We kind of got pushed.”

But they did rebuild and they had sturdier buildings constructed that included more open space under covered roofs.

“It worked out because now people can shop when it’s raining,” Imel said. The ends of the buildings were left open to let the air through. One reason is that moisture doesn’t build up and cause plant rot.

“And we get a better plant that way because they are hardened to the outside, much better than leaving them in a greenhouse and moving them out,” he said. “God had to push us or we would never have been where we are at.”

Imel said he doesn’t know exactly how many different types of plants they have, but it is well over 100.

“I don’t know for sure because I’ve never sat down and counted, but it could be 150,” Imel said. “For example, we have petunias but we have, like, 30 types of petunias. Same way with marigolds, and so on. We try to grow what the public wants and so far it has been a good match.”

He said the greenhouse business is based on speculation on guessing what buyers will want next year. They have already started planting for next spring.

“It’s a guessing game and hopefully, we guess well,” Imel said. “But, sometimes there are boo boos and duds, as the old saying goes. And what people want change; they don’t plant the same thing year after year. But basically, they come out and see what we have, if it is pretty, they buy it.”

And the change is as constant as the weather. Imel said the one constant is change, whether it’s the type of plant that is popular or what color of flower people want this season.

“Things change and so have we,” Imel said. “But we’ve been blessed to be here for so long.”

A touch of class