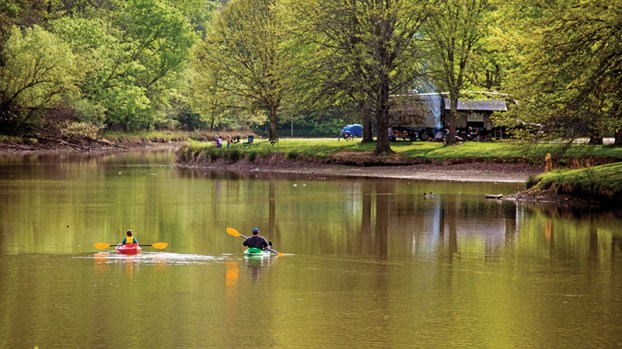 This area has plenty of state parks that offer boating, fishing, hiking and many more activities. Photography by Jessica St. James.

With summer in full effect, it’s time to get out to the woods and enjoy some time in a natural setting.

This area has plenty of state parks that offer boating, fishing, hiking and many more activities.

Beech Fork offers 275 camping sites with options ranging from no electric, electric only sites and sites with electric, water, and sewer.

The most used sites are the ones along Beech Fork Lake.

“Those are very popular camping spots,” said Beech Fork’s superintendent Dillard J. Price. “Four Coves, with its view of the lake, is one of the most popular sites in the park. We get a lot of families there. It’s pretty flat and the kids can ride their bikes.”

The park has six vacation cabins.

There are two pet-friendly cabins but only cats and dogs are allowed. The park’s website says that pets have always been permitted in the campgrounds.

“We’re pet friendly all the way around,” Price said. “As long as State Park regulations are followed. You have to have a ten-foot leash. As long as you clean up after your animal and keep them on a leash, you’re good to go.”

The park also has a pool that was built in the late ‘90s.

“Previous superintendents tell me that it changed the whole complexion of the park when the pool and the cabins were built,” Price said.

“We are fortunate to have four different events this summer,” Price said. “It’s a busy, busy summer.”

The four events include Ben Franklin; Minnie Pearl; Gabriel Arthur, who was the first white man to see the Kanawha Valley; and Ostenaco, who was a leader of Cherokee warriors during the French and Indian War.

In August, Bill Lepp, the self-described master storyteller and champion liar, will perform at the state park’s headquarters.

For the hikers, Beech Fork offers eight trails. Some are less than a mile and the longest is five miles.

“We were lucky enough to get a grant of about $150,000 a couple of years ago,” Price said. “We rehabbed the Overlook Trail and the Lost Trail, made a very nice set up. Lot of mountain biking.”

The park also has an activity room, picnic shelters, a camper store, and a boat dock rental facility that rents          small boats.

“Kayak rentals have really taken off,” Price said. “They are really popular.”

A naturalist has a weekly workshop and one of the events was a kayak class.

“We had a lot of repeat customers on that one. People liked getting out on the lake and bird watching,” Price said.

The most recent addition to the park is a group camping area. There is a rental picnic shelter along the fitness trail that wasn’t getting much use because people found it was hard to access.

“So we turned into a group camping site. The shelter has eight picnic tables, a charcoal grill, electric, really good access to a stream that goes by the lake,” Price said. The site accommodates up to 20 tents and is close to the pool.

“We have a lot of exciting activities planned and all kinds of things going on,” Price said. “We are looking forward to a good season.”

Lake Vesuvius is named for a blast furnace that produced pig iron from 1833 to 1906. It was one of 46 furnaces in the region. The remains of the main stack and a retaining wall are still in the park near a parking lot by the lake.

After the iron ore played out and the industry moved on, the land became part of the Wayne National Forest and some of the area is now used for people to enjoy recreational activities.

The Lake Vesuvius Recreation Area is 143 acres with two campgrounds, a swimming beach on Lake Vesuvius, picnic areas, group camping, fishing on the lake and several ponds, boating, 300 miles of hiking trails and an archery trail.

“There’s a lot to do for such a small area,” said Wayne National Forest’s Ironton District Ranger       Tim Slone.

There are two campgrounds, Oak Hill Campground and Two Point Group Campground, on either side of the lake which are “fairly developed with hot showers and electric,” Slone said. “You can camp in a tent or bring in an RV or camper.”

He said there is plenty for people to do while camping or just visiting for the day.

“There is an archery range,” he said. “There are almost 40 miles of hiking trails. There are horse trails.”

The ATV trail is extensive with 70 miles of trails that begin in Hanging Rock and go up to Black Fork.

“So you can have a good, long day out on your ATV,” Slone said. “A lot of people use the trails for mountain biking.”

Boats with electric motors are allowed on Lake Vesuvius and a local vendor rents canoes and kayaks from May through September at the Lake Vesuvius Boat Ramp.

“Most people just bring their own entertainment. Fishing is really popular. Lot of people bring their cycles,” Slone said. “A lot of people come out just to walk around and read the interpretative signs. The Rock House Shelter trail has a lot of signs and there are some by the old blast furnace.”

Besides Lake Vesuvius, there is Timber Ridge Lake.

“We have a lot of smaller ponds too, from an acre to five acres,” Slone said. “We have probably 100 of those scattered across the district. So there are a lot of places that bring people out here.”

The park has a fishing lake, a swimming pool, hiking trails, a horse trail and a stage for music and other performances.

The Jesse Stuart Lodge re-opened on May 23. It was closed in October 2015 after an electric fire caused smoke damage to guest rooms and damage to the roof of the building. The state spent $1.7 million to renovate the lodge, which is named after the famous Appalachian poet and author who lived a few miles away in W Hollow.

The outside looks essentially the same but with a new sign. Inside, the renovations included creating five rooms that can be used for conferences or family gatherings.

Park Manager Stephanie Poplin said the park’s biggest attraction depends on what time of the year it is.

“In the winter, it is the lodge,” she said. “But in the summer, it’s the pool, the marina, and campground are all very busy.”

“It’s a 10-acre area, it averages about 25 feet deep,” Poplin said. The SCUBA area is open from April to October. No reservations are required. “But the people do need to be a certified diver or be with someone who is a certified dive trainer.”

The area is right behind the lodge. It features several obstacles for divers to explore.

There are also trails for hikers, bikers and even horses.

“We have over 25 miles of hiking trails,” Poplin said. “Certain trails are designated for each individual type of use. You can’t do all three on the same trail.”

Maps are available at the marina or the lodge.

You can’t swim in Greenbo Lake but there is a swimming pool right on the lake.

“It’s very popular,” Poplin said. “There are water features in the kiddy pool. It is ADA accessible. There is a lift chair so anyone with physical disabilities can use it to get into the water.”

The pool also has a “zero entry” which means you can walk directly from the deck into the water.

“It is a ‘no wake’ lake. And that makes the conditions perfect for anyone who wants to kayak or canoe because     they don’t have to deal with wake,” Poplin said. Kayaks, canoes, paddleboats, motorboats and pontoons are         available for rental.

As far as activities, there is an amphitheater, which hosts a number of music events on the second Saturday on the summer months.

The park partners with the Greenup Extension Arts Council for the Summer Music series.

On July 8, it is the Greenup Co. Music Heritage Festival from 5-10 p.m. This year’s lineup has not been firmed up yet.

“That is primarily local musicians and various genres,” Poplin said.

On Aug. 12, there will be the Greenbo Grass Bluegrass Festival from 5-10 p.m.

On Sept. 9 will be the third annual Col. Bill Williams Music Festival from 5-10 p.m. It is named after a Greenup blues musician.

“Just as he was really getting his name out there and was getting famous, he passed away,” Poplin said. Williams was born in 1897 and was performing in the 1920s but didn’t gain much notice until the early 1970s. He passed away in 1973.

In September, there will be Jesse Stuart weekend with various activities and talks about the author’s life.