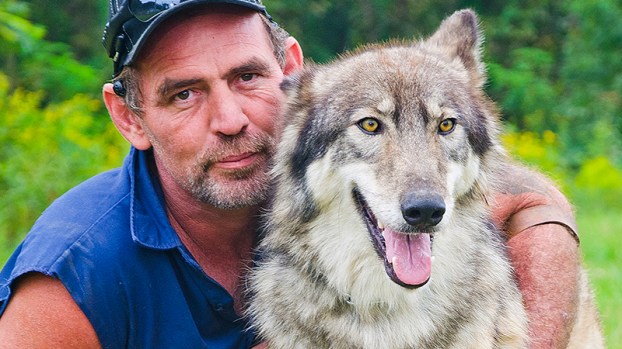 After getting Cheyenne in 2013, and then two more wolf-dogs not long after, DeBoard started Southern Ohio Wolf Sanctuary, a 501(c)(3) nonprofit organization. Photography by J. Bird Cremeans.

When John DeBoard lost his Chow Chow, JoJo in 2002, he wasn’t sure if he’d ever have another dog.

“Everyone said I needed another one,” DeBoard said. “Ten or so years later, I broke down and got one.”

That was Cheyenne, a wolf-dog.

A wolf-dog, also known as a wolf-hybrid, is the cross between a wolf and a dog, a wolf-dog and a dog or two wolf dogs.

“There are physical differences: eye placement, paws, tail, snout… there’s a lot of different things that you can really get into,” DeBoard said. “We try to show those differences in case someone decides they want one, there’s no misrepresentation. A lot of people have lost what a real wolf looks like, and there are some people that prey on that.”

After getting Cheyenne in 2013, and then two more wolf-dogs not long after, DeBoard started Southern Ohio Wolf Sanctuary, a 501(c)(3) nonprofit organization.

Since starting the sanctuary in 2014, DeBoard has adopted out between 20 and 25 wolf-dogs. He currently has 20 on-site.

“There are some that we keep,” DeBoard said.

Cleo is the youngest, at 8 months. Sammy and Spatz are the oldest at 10.

“Each one of them is different and unique,” DeBoard said. “Cheyenne is a big baby. Macoon, everyone calls him ‘Lover Boy’. He likes to lick and get in your face. Hinder is a little standoffish until he gets to know you.”

DeBoard gets calls from animal control, shelters and even some individuals about taking wolf dogs in.

“We’ll rescue them and then either keep them with us or find them a place,” he said. Once the wolf-dog comes to the sanctuary, they are rehabilitated, socialized and most importantly, cared for.

“We work with them so people can interact with them,” DeBoard said. “The training process is a lot more in-depth than domesticated dogs. You have to be really dedicated to the animal, really spend time with it. You have to really become a part of its pack, and you have to be the alpha.”

Those who are interested in adopting one of the wolf-dogs from the sanctuary must fill out an application, and are subject to screening, including background and home checks.

“We have a process that they have to go through,” DeBoard said. “We have to check all of the laws — state, county, city, town — regarding ownership. We want to make sure they’re (the dogs) legal to be in the area that you live in. We also want to make sure that you have the right containment and some general knowledge about these animals.” A fee is also set for each dog. “It just depends on what we go through to get them, the vet care, things like that.”

“The higher the content, the more on the wolf side it’s going to be,” DeBoard said.

While there isn’t a DNA test that tells how much percentage of wolf a wolf-dog has in it, phenotyping will indicate if there is any wolf present. The most common issue that DeBoard has run into when discussing his organization and the animals is the term “wolf.”

“It throws people off,” DeBoard said. “There’s a lot of people that are adamant about it and love it, but then there’s the group that doesn’t. You have that with all breeds, though. A lot of people ask if wolf-dogs can be indoors, but we always recommend not to make them a house dog. They make much better companions than they do pets.”

Shirley Seim has done a little bit of everything over the course of her career. “I’ve been a medical transcriptionist;... read more