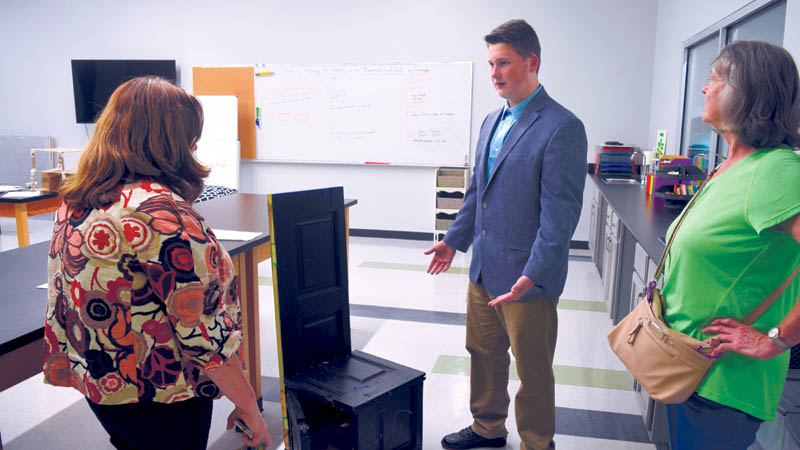 Jacob Cermeans shows off a chair that he and his classmates designed and built to his mother, Elizabeth Cermeans, and grandmother, Mary Wilkes, during the Tri-State STEM+M open house.

Had to design, create chairs, robots as part of academy program

SOUTH POINT —After their first week of classes, students at the Tri-State STEM+M early college high school, in South Point, were eager to show off what they’d learned to their parents and guardians on Friday night.

Allison Himes, a sophomore, said that one project she worked on required acute attention to detail.

In that project, she explained, she had to observe while a partner built a robot using a variety of craft objects, like rubber bands and pipe-cleaners, and take note of what that partner was doing, without talking to them about it.

They couldn’t communicate verbally at all during the project, she said.

Then, after documenting the process, she had to pass those instructions to another student.

That student had to try to replicate the robot using only her written instructions, without asking any questions. The project encouraged precision and detail in the students writing, she said, and focusing on what was most important to properly document and replicate their work.

Other students showed off engineering projects, like junior Jack Clouse, who designed and built his own desk, or Jacob Cermeans, who showed off a chair he and his classmates designed.

He explained to his mother, Elizabeth Cermeans, and grandmother, Mary Wilkes, that the chair evolved as they discussed what they needed it to do, and what else it could be used to do.

“We added these hangers on the back, for purses or jackets,” Cermeans said, explaining that the idea came about after female classmates decided that one nice addition would be a more secure way to hang purses over the back of their chairs.

His mother, Elizabeth, was especially excited for the hands-on projects and learning opportunities the school is providing to Jacob and his classmates.

“I love the hands-on and design incorporated into the lessons,” she said, “and their ability to add to the design.”

She said that while they want Jacob to “think more globally,” they also want him to learn practical skills that he can use, whether he stays in the area after graduation or moves away.

So far, she said, Jacob is excited about attending his new school.