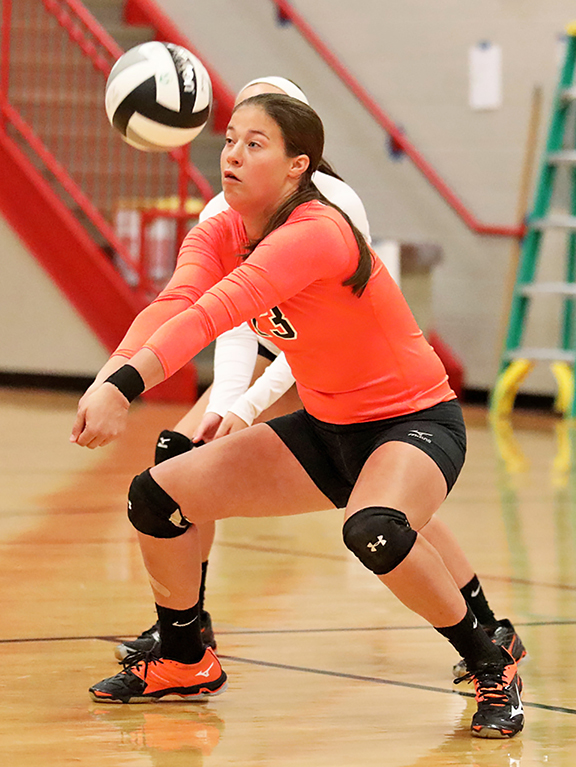 MINFORD — To get a season-opening win, it took a team effort for the Ironton Lady Fighting Tigers.
Ironton dropped the first set and then won three straight tough matches to win the volleyball game over the Minford Lady Falcons on Monday.
Ironton lost 25-19 before rallying to win 25-18, 27-25 and 25-22 thanks to balanced serving points that saw Peighton Rowe lead with 15 points, Samantha LaFon nine, Riley Schreck seven, Emma Blankenship and Ali White six each and Lexi Wise had eight points including three aces.
“Serving seemed like everyone contributed,” said Ironton coach Beth Campbell. “There were times this evening when the team found itself in a hole and had to work hard to get on top. They executed at times that I think surprised them of their effort.”
Wise also had nine kills for the offense with LaFon and M’Kenzie McMaster four each. Kenzie Cremeens had three kills.
On the defensive side, Schreck, Cremeens and Wise combined for 25 digs. McMaster had eight solo blocks and Mary Beth Burton seven. Cremeens and LaFon had four assists each.
White racked up 20 setting assists and Rowe had four.
Minford was led by Livi Shonkwiler with 15 points, Zoe Doll had 10 and Hannah Thacker nine.
“The girls have set many goals this season. They weren’t happy with all of their efforts this evening. They want to be better in every area and I love their drive to improve,” said Campbell.
In the jayvee match, Ironton lost 18-25, 23-25. Kiandra Martin had 10 points, Elli Williams eight and Malea Delawder five.
Ironton hosts South Point at 5:30 p.m. on Thursday in an Ohio Valley Conference match.

Jim Walker jim.walker@irontontribune.com PINE GROVE —This was a match inside a match. The Coal Grove Hornets battled past the Fairland... read more