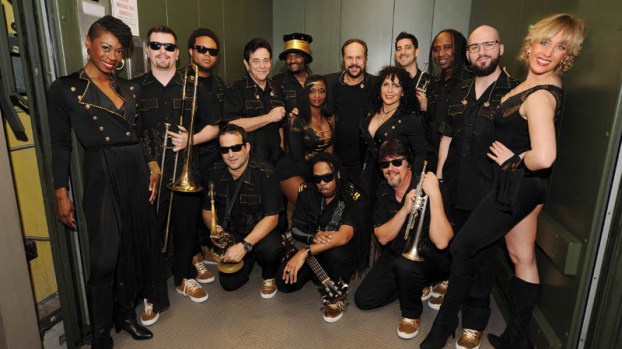 KC and the Sunshine Band set for Saturday

Will perform its numerous hits on Ashland stage

ASHLAND — One of the biggest chart-topping acts of the 1970s is set to take the stage at the Paramount Arts Center on Saturday.

KC and the Sunshine Band have to its credit eight top 20 hits, five of which went to number one on the charts between1975 and 1980.

Led by frontman and songwriter Harry Wayne Casey, the group formed in 1973 and has seen several different incarnations.

Their hits like “Get Down Tonight,” “Keep It Comin’ Love” and “That’s the Way (I Like It)” have become an inescapable part of American pop culture.

While often characterized as a disco act, the band has spanned several genres.

“It started as R&B pop,” Casey said of the band’s beginnings, when he was a record store employee in Florida. “Then it turned to dance. Then they got rid of disco and started to call it new wave. But I think our base is R&B music. That’s definitely what I was more into.”

The original version of the band broke up in 1985, but a reunion occurred in 1993, as older fans grew nostalgic for the music of the 1970s and a younger generation heard the songs for the first time.

Casey has kept the band going since the reunion and says his audience draws from all eras.

“We get all ages,” he said. “Always have and still do. Sometimes, there are three or four generations standing there in the audience. It’s pretty cool to see.”

He says there are some differences in touring now, versus the band’s original run.

“There are definitely not teenagers screaming over the band anymore and you can hear the music,” he said. “It’s a different world on stage. It’s actually pleasant.”

And with wireless microphones, he’s freed up to dance and no longer confined behind the keyboard.

“I’m definitely out front more than I was before,” Casey said.

He said setlists from the show draw from throughout the bands catalog, with the obvious chart toppers included.

“We definitely have the hits and there were a lot of hits,” he said, adding that newer covers are also included. “We just put out an album last year of ‘60s classics. We do some of those in the show.”

He said they will also delve into the group’s catalog.

“I try to keep stuff familiar with the audience, but I also started doing some obscure album cuts. We put stuff in the show, covers here and there. And a lot of the show has elements of other songs from the albums, as part of a medley or instrumental.”

While the band’s albums received rave reviews upon release and their self-titled second album is regarded as a classic, the Sunshine Band sometimes tends to get overlooked for their overall work and have yet to receive a Rock and Roll Hall of Fame nomination.

It is not uncommon for groups of the genre and era. Fellow disco hitmakers and acclaimed group Chic have also not received an induction, despite multiple nominations.

When asked if he feels the band has not received critical due for his songwriting and that of his collaborators, Casey agrees.

“I feel like I’ve been dismissed,” he said. “I’m not sure why. I know we had a major impact on music and some in the band were very responsible. It is what it is, I guess. For some reason, my writing has been dismissed. But the songwriting is strong. The songs have proven that time and time again.”

However, his musical influence is evident by the number of covers, samples of his work and the use of his songs in films and commercials.

Casey recalled a few of his favorites.

Casey says after nearly 45 years from the band’s launch, he still gets a thrill from performing live.

“Absolutely, he said. “Some of best moments I have had in my career have been on stage, getting to see the fans, interact with them and have some connection with them and the music.”

HUNTINGTON — The museum shop at the Huntington Museum of Art will host a book launch for “Through the Children’s... read more