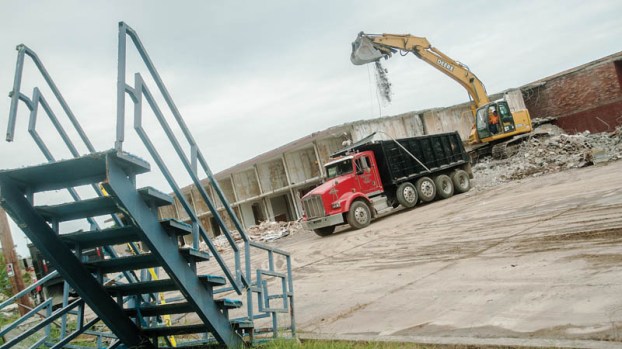 Crews from Southern 52 Excavating work on the back lots demolishing sections of the Grandview Inn Monday afternoon.

Demolition under way on portions of Grandview Inn

SOUTH POINT — Demolition is under way on a portion of the Grandview Inn near South Point.

The Lawrence County Economic Development Corporation purchased the property for $1,050,000 in the spring, with hopes of redeveloping the site.

About a week and a half ago, crews from 52 Southern Excavating began the process of demolishing a support room, laundry room and portions of the inn that were damaged by a 2005 fire.

LEDC Executive Director Bill Dingus said work should be completed by the end of the month.

“The big issue is getting blighted properties down,” he said. “It’s of great benefit to the county and this was one of the worst.”

Dingus said the LEDC received grant money from the county for the demolition and the group will pay the difference on the portion not covered by the grant.

He said there is no definite plan as to the development of the site and options are still being discussed.

“There have been a lot of ideas and artist’s renderings,” he said.

The inn, which boasted 256 rooms, is located on U.S. Route 52, and Dingus said it was once “one of the finest hotels east of the Mississippi.”

A number of famous guests appeared at the inn over the years, including actor Charlton Heston.

Dingus said Billy Ray Cyrus used to regularly perform in the lounge and the fish fries on Fridays would draw about 1,000 people.

The property had become a cause for concern in recent years, with multiple drug arrests on the premises.

In April, officials from Spectrum Outreach had approached the Lawrence County Commission asking that action be taken on the Grandview and two other motels in the region, where a number of families with children were residing.

The Grandview staff was let go after it was no longer operated as a hotel following the LEDC purchase, and Dingus told the LEDC executive committee in May that group had worked to place those people in other positions.

In addition to demolishing portions of the inn, the LEDC has been working to repair the roof to the building.