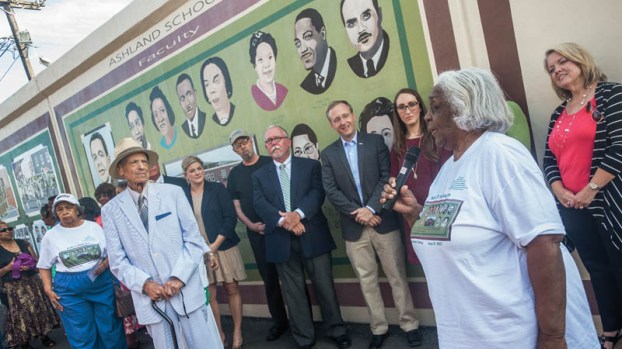 Honoring the past, celebrating the current

ASHLAND — A mural honoring the education and heritage of Ashland’s African-American community was unveiled on Tuesday.

A crowd of a few hundred gathered at the Ashland Train Depot for the reception and ribbon cutting, hosted by Ashland in Motion, of the Booker T. Washington School mural on the flood wall.

Built in 1903, the school, which was located on Central Avenue and Seventh Street,  served the city’s black residents during the Jim Crow era, funded primarily through donations.

After desegregation in 1962, it closed the following year and was demolished.

The mural, by local artist Jerry Johnson,  with assistance from the Ohio University Southern Art Department, depicts the school building, shows scenes of students and honors the school’s longtime principal, C.B. Nuckolls, and it 1946 faculty.

It joins other murals on the floodwalls depicting scenes from Ashland’s history.

Fundraising for the mural began more than a decade ago, and the project was adopted by Ashland in Motion to see it through to completion.

“We are so delighted to be a part of this project and see it come to fruition,” she said.
Ashland City Commissioner Matt Perkins said the project received a jumpstart when he was approached by Don Campbell, who used to deliver mail to the city’s black neighborhoods in World War II and the following years.

“He thought it was a shame that it was stalled and that it had not been completed,” Perkins said. “And he wanted to see what we could do.”

Campbell, who was on hand for the unveiling, remained humble about his role.

“I knew all of these teachers,” he said of the school’s faculty. He said he had hosted meetings at his home and local media had helped to take up the cause of finishing the mural.

“Our first game was always against Sandy Hook,” he said.

Many of the region’s white schools would not play against Booker T. Washington. One that did, however, was Holy Family School, and one of its former athletes, the city’s mayor, Stephen Gilmore, recalled getting to know the faculty and students.

“I’m with my people today, from this wonderful school I grew up close to,” he said of old friends in the crowd.

He praised the work of Johnson, for laboring on the mural.

“He put his talent into preserving the history of this school,” Gilmore said, and spoke of the various faculty members depicted, who are no longer living.

“Wouldn’t these people be proud?” Gilmore, who also led the gathering in prayer, said. “And I couldn’t be more proud to be your mayor today.”

Brenda Martin, who served on the committee to get the mural completed, said the Booker T. Washington School mural was one of two the group was working on.

A second, which will depict the history of African-American churches in the city, is set to go up on the adjacent section of the floodwall. She said they estimate it will be completed in spring of 2018.

Martin said the mural is important not just for honoring the past.

“To celebrate history is also to celebrate current history, and the progress we’re making with unity and love and showing value and appreciation for all of Ashland’s residents,” she said.

Following the ribbon cutting, the group went into the depot for a reception, where vintage photos and yearbooks of the school were on display.