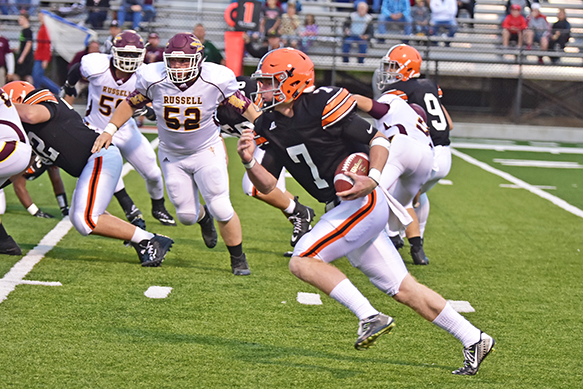 First, the Ironton Fighting Tigers lost their season opener 48-3 to Wheelersburg. Next up was the Russell Red Devils who had beaten Ironton the past two seasons.

Ironton desperately needed a win and they got it.

The Fighting Tigers used a strong defense and a solid all-around effort by quarterback Gage Salyers to rout the Red Devils 35-7 on Saturday at Tanks Memorial Stadium.

“This was a big game for us just to see where we were at. After last week, I still believed we had a good football team but you’ve got to go out and prove it,” said Ironton coach Mark Vass.

“It was nice to go out and get the win in that fashion and get some momentum and some confidence which is what we need and just to get better. It came together pretty well. I still thought there were a lot of mistakes, but for the most part it was a good effort.”

Salyers struggled in his first varsity start last week, but he was 11-of-16 for 193 yards and two touchdowns while running five times for 82 yards and a score as Ironton racked up 362 total yards including 169 on the ground.

Defensively, Salyers also had a pair of interceptions.

“Coach Vass said this week to go all out, come back from last week’s loss, so we went to work this week and I just read the guy there and saw it and took off,” said Salyers.

“My line played better this week in practice and tonight they showed all their work and got me more time to find the receivers. And I was getting the ball out quick to receivers and they had crisp routes.”

“Our front six has been pretty solid. They’re doing a good job. They’ve been good from the get-go. They have the size, the strength and the effort. That’s going to be the strength of our defense,” said Vass.

“I was glad to see the secondary come on. It was a rough week last week but they bounced back and responded. They’re getting a feel for what we’ve been doing and just playing. They weren’t on their heels anymore and attacking. The defense did a heck of a job.”

Salyers set the tone for the game as he kept the ball on the first play from scrimmage and race 76 yards for a touchdown. Izack Unger kicked the first of five conversions.

“It kind of set off the momentum and gave us a great start which is what we needed,” said Vass.

After a Russell punt, Ironton went 58 yards in four plays as  Fosson rambled 33 yards for a touchdown and it was 14-0 with 8:49 on the clock. Fosson finished with 50 yards on four carries.

Russell (0-2) answered with a 58-yards, 10-play drive highlighted by a 27-yard quarterback draw by Austin Church who also went the final yard for the touchdowns. Sam Ewing kick the point after and it was 14-7 with 5:01 on the clock.

Russell fumbled a punt and Reid Carrico recovered at the Red Devils’ 13. Garrett Carrico — Reid’s older brother — ran 14 yards for a touchdown and it was 21-7 with 2:57 left in the quarter.

Following a scoreless second quarter, Ironton scored on its second play of the third quarter when Salyers hit Reid Carrico on a 62-yard catch-and-run to make it 38-7 with 9:19 on the clock.

Russell drove to the Ironton 6-yard line but the Fighting Tigers held on downs.

Ironton then used 13 plays to score again as Salyers hit Ethan Wilson on a 33-yard scoring pass with 10:08 to play.

Church finished the game 7-of-15 passing for 77 yards but suffered two interceptions. Grant Bates had 30 yards on four carries.