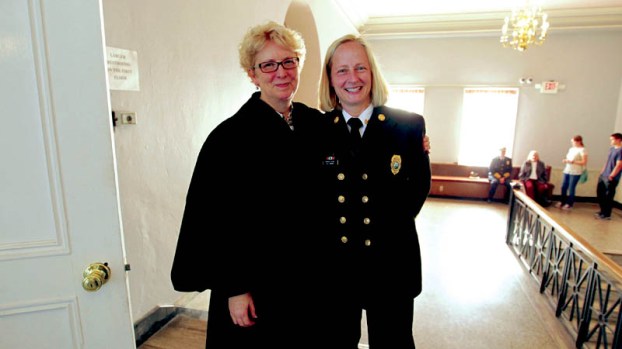 Cabell Huntington drug court Judge Patricia Keller and Huntington Fire Department Chief Jan Rader are two of the three women featured in the Netflix documentary, “Heroin(e),” about how the community is dealing with the opioid crisis.

Huntington fire chief, judge, women’s advocate in Netflix documentary about dealing with drug use in community

Rader, an Ironton native, said she got involved after independent West Virginia filmmakers Elaine McMillion Sheldon and her husband, Kerrin Sheldon, came to Huntington to do a documentary on how the city was dealing with the opioid crisis.

“They came down here and wanted to do some filming, they didn’t know exactly what direction they were going to go,” Rader said. She said the pair came to Huntington multiple times over a year to do filming. They actually started filming Rader before she became chief in March 2016 and became the first female fire chief of a professional fire department in West Virginia. “Yes, I was a shift commander when they started hanging out and doing ride-alongs.”

Rader said they weren’t shocked by what they saw with people overdosing.

“They were fascinated as how we, as a community, were rallying around and helping each other do something about it,” she said. “I think that is more what they were looking for.”

The film focuses on Rader, Freeman, a realtor who runs Brown Bag Ministries which helps women who are in the sex trade to support their addiction and Judge Keller.

The three women know each other through the Mayor’s Office of Drug Control Policy, which wrote a grant to expand the drug court and the Women’s Empowerment and Addiction Recovery program.

“That is a special track in drug court for women who have been involved in the sex trade,” Rader said. “And Necia and I sit on the drug court treatment team for Judge Keller. We are all really good friends and we help each other out when we can.”

Rader said the film crew was just a couple of people and it didn’t really bother her to have them following her as she went about her business.

The Ohio River Wine Festival will return to Ironton at the end of September. It will be from from noon-4... read more