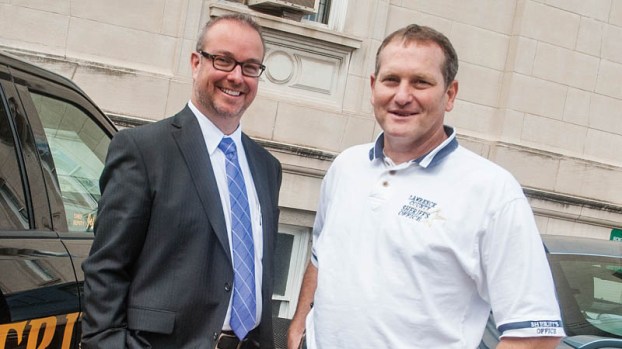 Lawrence County Prosecutor Brigham Anderson, left, and Lawrence County Sheriff Jeff Lawless. With a new grant from the state, Anderson wants to have a full-time deputy to convince overdose survivors to get treatment.

The Lawrence County Prosecutor’s Office has received a grant to continue the battle against drug abuse.

The $100,000 grant comes from a $3 million grant program by the Ohio Attorney General to expand Drug Abuse Response Teams (DART) or Quick Response Teams (QRTs) to address the opioid epidemic in state.

“It’s for the quick response to the opioid epidemic,” he said. “One of the things we have been doing at the prosecutor’s office for quite some time is reaching out to individuals who have overdosed and attempting to get them into a treatment facility. This grant is going to further that process.”

Anderson said he would like to hire a uniformed police officer to work full-time for the prosecutor’s office and the drug task force.

“He would approach these people who have overdosed to get them into treatment so it doesn’t happen again,” he said.

The prosecutor’s office gets reports from Lawrence County EMS when they respond to an overdose.

Anderson said this grant would continue that effort of treatment over jail. He said they are working with Lawrence County Sheriff Jeff Lawless.

“Hopefully, we are going to get a sheriff’s deputy to be stationed in our quick response team full-time,” Anderson said. “This grant is going to expand our reach into the community when it comes to overdoses.”

Anderson said the ultimate goal is get them treatment so they don’t commit crimes to support their drug habit.

“We’ve found if they are treated for their underlying addiction, they are a less likely to re-offend or commit new crimes,” he said, adding 95 percent of the cases they deal with are drug-related in some way. “So, we know that drugs are the root cause. So now, we are trying do everything we can to get at that cause to stop some of the crimes that occur.”

Anderson said that they are trying different approaches to the drug epidemic in an effort to curb it.

“And I think that many of the things we are doing are working,” he said. “We just need to continue to progress in those programs.”

Among the programs are the prosecutorial diversion program and the Lawrence County Drug and Major Crimes Task Force. The Lawrence County Common Pleas Court is implementing a drug court to deal with the offenders. Besides those, Anderson has been speaking at town halls, high schools and other community events in an effort to create public awareness about the depth and severity of the drug problem in the county.

As an example of that, Anderson said there have been 255 overdoses so far this year. Fifteen of those were fatal.

“That is a much larger number than we have experienced in years past,” he said. “So there is a need in this community for this grant.”

The spike in overdoses is in part because opioid abusers used to buy pills when there were so many pill mills in the area. After those were closed down by the state, they turned to heroin and fentynal to get their high.

“When people are addicted to an opioid, it’s very, very difficult to get off it,” Anderson said. “And people are willing to do almost anything to get that high.”

“Our goal is to help prevent drug-related deaths and overdose recurrence, making long-term recovery possible for those struggling with addiction,” said Peterson. “Support for these programs helps law enforcement connect addicted individuals with recovery services, which is key in saving lives and helping affected families begin to heal.”